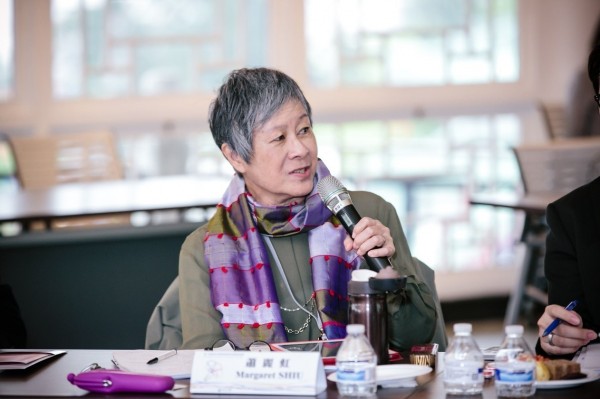 In this session, the moderator asked the committee to talk briefly about their current projects or elements they think should be included in future projects.

Mr. Prim is currently involved in cultural management and hopes to organize events between Taiwan and Cambodia to continue the current people-to-people exchanges. This roundtable meeting has provided a platform for the committee members to exchange ideas, but it is also important to work out how to sustain the synergy created by different communities.

Dr. Peycam hopes to expand Taiwan's cultural exchanges with Southeast Asia and come up with ideas to include other communities, such as scholars and artists. Educational institutions and NGOs can collaborate or co-organize workshops to facilitate exchanges among different communities.

Mr. Kusumawijaya thinks that having artists going to suburban areas is a grassroots movement that can have a huge impact. However, East Asia's and Southeast Asia's vibrant economic development has led to higher levels of urbanization and created more interactions among urban dwellers. As a result, future exchanges, while focusing on equality, should also be based in cities so as to mobilize different parts of communities, such as NGOs.

Mr. Lii uses business marketing models to set goals before drawing up a plan. Scheduling, budgeting, and delegation of managerial duties for each project should also be determined in advance. For instance, Southeast-Asian-style furniture is currently widely popular in China. Mr. Lii has set up a space in central Taiwan with abundant materials and resources for furniture making. Now, he is working on the problem of the lack of trained workers.

Ms. Lan thinks that future projects should include small-scale residency programs or different types of events where artists and scholars travel to each other's countries for in-depth exchanges.

Ms. Heuangsoukkhoun suggested that future exchanges should be more flexible so as to generate more ideas.

Dato Goh is currently working on Tourplus, which offers online tour guide services, transportation arrangement, and car rental services. He hopes that this platform will help promote tourism and cultural exchange between Taiwan and Malaysia. He believes that the cultural tourism industry in Taiwan will flourish if Taiwan can offer similar resources.

Dr. Chapakdee believes that culture comes from people. To experience other cultures, people have to take part in cultural activities. People are the key to demonstrating and facilitating cultural exchanges.

Ms. Cassidy said that the roundtable meeting gave committee members the opportunity to get to know each other, understand each other's work, and learn from each other. As diversity has become a very important aspect of modern capitalism, in the future meetings like this should be held more often so that people can share their cultural knowledge and promote diversity.

There are very few full-time artists in Brunei. Overseas travel has to be approved by the government, so the challenge for Bruneian artists is how to plan meaningful exchanges, get financial support, carry them out, and produce results. Currently, Bruneian artists tend to use online exchanges. For the time being, Ms. Ahmad believes that the Internet is the best way for other countries to find out about Brunei. She hopes that there will be opportunities for artists in different fields to have cross-border exchanges in the future.

Mr. Chung puts great emphasis on collaboration and values. People-to-people exchanges and collaborations are crucial in that culture comes from people. He proposes the following questions: how do we define "human”? how does an individual in a community act as the subject of art and culture? how can artists help individuals demonstrate their culture? how do artists themselves explore the meaning of being "human”?

Shefong Chung said that through CREATIVE SEA, they hope to advise the new administration on cultural policies, so that they are more flexible.

Mr. Takamori pointed out that collaboration models at the government level, NGO level, and community level are different, so it is imperative to develop suitable models for collaboration and exchange at each particular level. In addition to art and cultural exchanges, the government should also focus on research and provide grants to researchers who are interested in issues relating to Southeast Asia.

Dr. Peycam welcomes further exchanges on the platform provided by the upcoming International Convention for Asia Scholars (ICAS). The convention serves as a neutral platform that encourages speeches, performances, forums, and other forms of art and cultural exchanges.