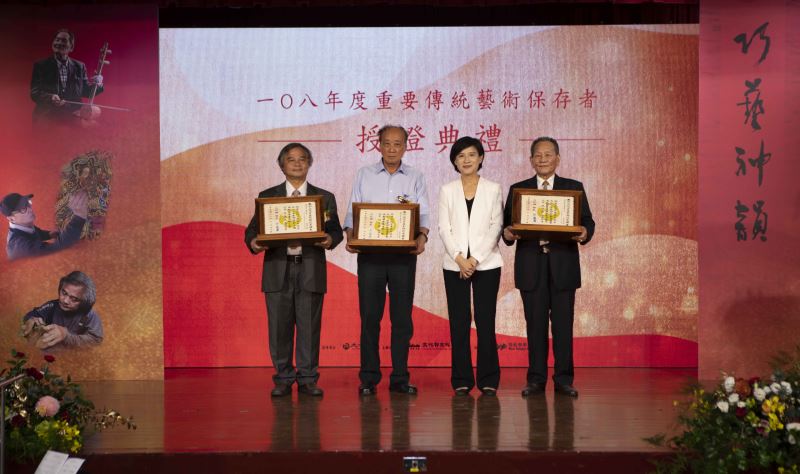 Lin Zhu-an (林竹岸), Hung Ping-shun (洪平順), and Li Ping-kuei (李秉圭) — who have been formally bestowed the title of "Living National Treasures" — received a certificate that recognizes them as important preservers of Taiwan's traditional performing arts and craftsmanship from Minister of Culture Cheng Li-chiun on July 20 at the Cultural Heritage Park in Taichung City.

Lin, Hung, and Li were respectively certified for mastering the skills for playing the backstage music that accompanies Taiwanese opera performances, the techniques for painting and restoring decorative pictures on traditional architecture, and the artistry of traditional wood carving. Among them, Li is a second-time awardee who was previously commended as an ornamental wood carver.

At the July 20 ceremony, Minister Cheng paid her respects to the three master artisans while thanking them for preserving the roots of Taiwan's culture. She stressed that traditional arts are the backbone of a nation's culture that is formed through the daily lives and habits of the general public over a long period of time, thereby reflecting the diverse development of contemporary Taiwanese society.

To preserve Taiwan's intangible cultural heritage, the Ministry has tripled this year's budget for conservation and inheritance, and doubled the budget on cultivating successors for the nation's traditional theatrical arts and promoting this genre of art.

To set up more a comprehensive mentorship program for traditional arts, the Ministry has also increased the monthly stipend for participating mentors to NT$50,000 and the subsidy for their apprentices to NT$15,000 per month since October last year. So far, a total of 61 trainees have successfully graduated from the program.

To further hone the skills and cultural knowledge of these graduates so that they can become fully qualified to carry on the traditional artistries passed down from their mentors, the Ministry will launch an advanced mentorship project on a trial basis this year. The project will provide the returning apprentices with a monthly stipend of NT$30,000 — twice the amount offered by the preliminary training program — so they can focus on learning without worrying about their basic livelihoods.

Since 2009, 18 styles of Taiwan's traditional performing arts have been formally identified and listed, with 22 artists from this field honored as "Living National Treasures." A total of 10 traditional crafts have also been included on the registrar, with 14 artisans from this field receiving the coveted title as well. The certification process is based on the nation's Cultural Heritage Preservation Act.

To help the general public learn more about the three certified master artisans and their techniques, the Taichung-based Cultural Heritage Park is hosting an exhibition on their oeuvres from June 12 through Aug. 25.