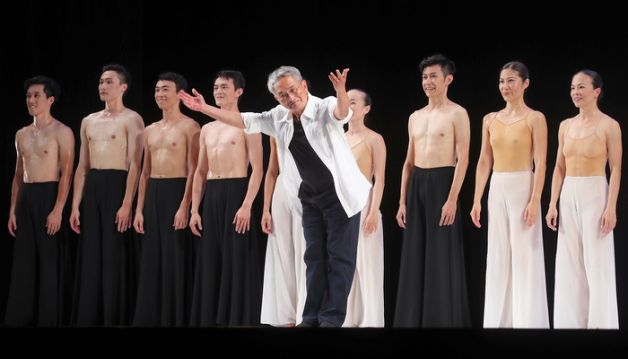 Ahead of his retirement at the end of this year, Cloud Gate Dance Theatre founder and artistic director Lin Hwai-min (林懷民) gave his final public outdoor performance with the troupe on the outdoor plaza of Taipei's National Theater and Concert Hall on the eve of July 27.

Minister of Culture Cheng Li-chiun gave her heartfelt thanks to Cloud Gate for all the beauty and goodness they have given to Taiwan, offering her highest tribute to Lin for his many years of "irrigating the land and the souls of its people with art," as well as helping the world know Taiwan better through the warmth and tenacity of cultural power.

Cloud Gate is Taiwan's first professional dance troupe. Founded in 1973, the troupe aims to tell distinctively Taiwanese stories through the art of dance and uses its art to communicate values of universal care and concern. The troupe has received countless plaudits on the international stage, becoming one of Taiwan's preeminent global calling cards.

Lin’s works are built upon a contemporary Taiwanese perspective through a fusion of eastern and western aesthetics and a melding of traditional and modern styles to communicate a cultural strength and vitality unique to Taiwan.

More importantly, he has helped bring the performing arts out of the theater and to the people, giving everyone the opportunity to experience it through outdoor and community performances. Beyond his own creative and performance work, Lin has also led Cloud Gate around Taiwan to sow the seeds of art with practical initiatives.

Lin is a choreographer, artistic director, educator, and philanthropist, as well as one of the most influential figures in the Taiwanese cultural community. Under Lin's leadership, Cloud Gate belongs not just to Taiwan, but also to the world, and that is something that all the people of Taiwan can be justly proud of.

The Ministry of Culture is confident that the troupe will continue to create spectacular works of dance under the leadership of its new artistic director Cheng Tsung-lung (鄭宗龍).