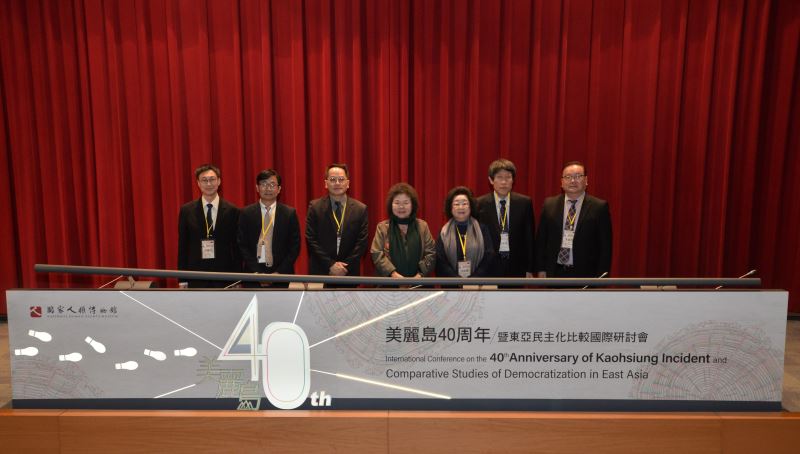 The National Human Rights Museum held an international conference on Dec. 5 to mark the upcoming 40th anniversary of the Kaohsiung Incident (美麗島事件, also known as the Formosa Magazine Incident), a 1979 political crackdown widely considered to be a turning point in Taiwan's transition from authoritarian rule to budding democracy.

Titled "International Conference on the 40th Anniversary of Kaohsiung Incident and Comparative Studies of Democratization in East Asia," the conference at National Taiwan University brought together political figures and scholars from home and abroad, including Presidential Office Secretary-General Chen Chu (陳菊), who was jailed for her involvement in the incident.

Sharing her reflections on the pivotal crackdown on pro-democracy demonstrators who urged the Kuomintang regime to lift martial law and the ban on political parties, Chen described the events on Dec. 10, 1979 as "a movement based on participants' democratic values" and "a crucial turning point in the historical development of Taiwan."

Despite the ordeals of oppression, authoritarianism, and military rule of that era, there were still individuals willing to stand up against injustice, uphold principles, and pursue basic human rights, the dissident-turned-politician said, urging younger generations to continue safeguarding freedom and democracy in Taiwan as the Kaohsiung Incident generation diminishes with time.

The conference is not the only event organized by the Ministry of Culture to mark the 40th anniversary of the Kaohsiung Incident — a special exhibition is now being held at the National Human Rights Museum's First Court, where trials stemming from the incident were held in 1980. It runs through Sept. 3, 2020.