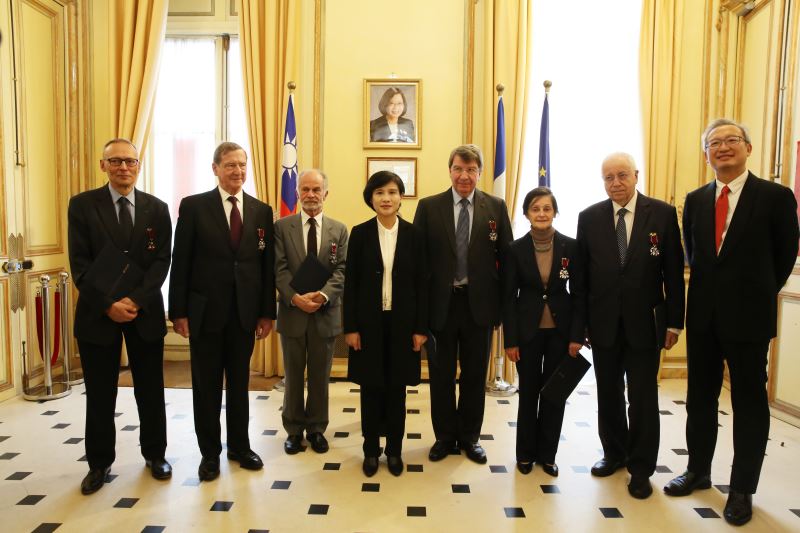 The "Medal of Culture (文化獎)" was established this year by the Ministry of Culture to honor both Taiwanese and foreign nationals for their contributions in promoting Taiwan's culture on the world stage through inheritance, promotion, research, innovation, and cultural exchange. In the inaugural bestowment of this honor, six French academics each received a Medal of Culture in Paris at the Taipei Representative Office in France on Feb. 3.

The awards ceremony was hosted by Minister of Culture Cheng Li-chiun and Taiwan's Representative to France Francois Chih-chung Wu (吳志中). Minister Cheng pointed out that the special reason for holding the event in Paris was to cherish the friendship between Taiwan and France and to honor Institut de France members with the first edition of the award. This year's winners are also among those who helped conceive the Taiwan-France Cultural Award, she added.

The design of the cultural medallion is based on the native Moth Orchid (Phalaenopsis, 蝴蝶蘭), using a "silk-wrapped flowers (纏花)" style that is traditionally used to bring about good fortune and auspicious wishes. Otherwise known as "spring flowers (春仔花)," this skill set was recognized as an "important traditional craft" under the nation's intangible heritage registrar by the Ministry of Culture this year.

Minister Cheng emphasized that the Medal of Culture thanks the awardees on a professional level while also representing good wishes to close friends. We look forward to deepening the friendship between Taiwan and France through cultural exchanges, she added.