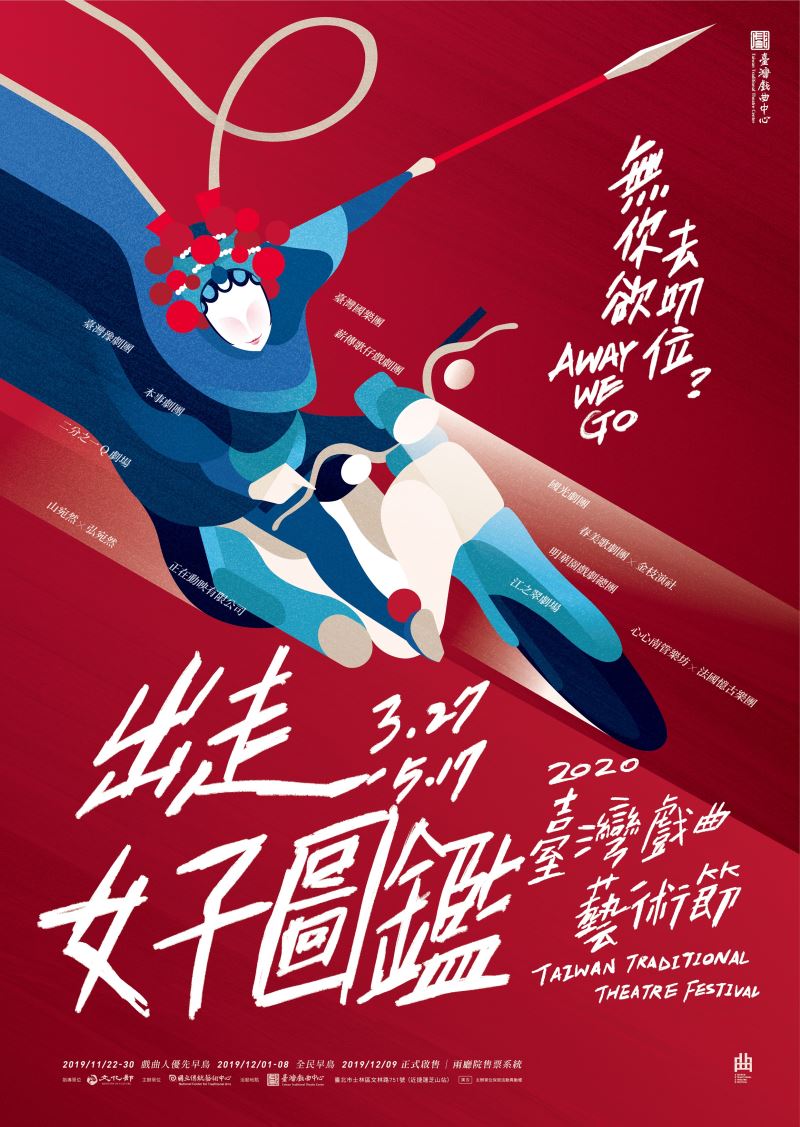 The 2020 Taiwan Traditional Theatre Festival is set to host 13 productions surrounding two themes — "women breaking boundaries" and "cross-genre experiments" — from March 27 to May 17 in Taipei. With the former exploring feminist consciousness and the latter manifesting Taiwan's boundless creativity, the festival seeks to make the voices of once-silenced women heard through variegated forms of theater.

Now in its third year, the 2020 festival titled "Away We Go" will feature such established troupes as Taiwan Bangzi Opera Company (臺灣豫劇團), the only national troupe of its kind, Gang-A-Tsui Theater Nanguan Music Ensemble (江之翠劇場), one of Taiwan's most critically acclaimed Nanguan ensembles, and Taiwan’s national Peking opera troupe GuoGuang Opera Company (國光劇團).

Chen Chi-ming (陳濟民), director of the National Center for Traditional Arts, said the festival is committed to its primary missions of facilitating conversation between the classics and the contemporary, and driving home the impact of traditional and modern arts.

While the festival's latest edition aims to present the challenges that faced women in the past, these issues still resonate with today's world, Chen said. The productions stem from a variety of performing styles and art forms, marking the abundant creativity of Taiwan's performing artists who stepped out of their comfort zone to bring new and vibrant experiences to theatergoers, he added.

"Matinee In The Rain" depicts a twisted mother-son relationship. Accomplished thespian Kuo Chun-mei (郭春美) plays the mother, a seasoned opera actress who discards her children in a night of heavy rain. Forever scarred by his mother's absence, the son, played by the award-winning actor Wu Pong-fong (吳朋奉), finds himself unable to escape from the seemingly endless repetition of that night.

Furthermore, GuoGuang Opera Company will present classic fighting scenes from the Three Kingdoms Period through a female perspective. Ming Hwa Yuan Arts & Cultural Group (明華園戲劇總團), on the other hand, will deliver "The Apocalypse of Darkness Warfare (冥戰錄)," a comics-based production featuring a female protagonist who shares the same name as Lin Mo-niang (林默娘), the mortal appellation of sea goddess Matsu.

Taiwan Bangzi Opera Company, meanwhile, will bring its award-winning piece "Empress Dowager Cixi and Consort Zhen (慈禧與珍妃)," which centers on the fierce fighting between the Empress and the Emperor's favorite concubine.

Apart from the aforementioned classics, another highlight of the 2020 edition is the selection of productions that reflect the evolution of Taiwan's traditional theater under the influence of the western "little theater" movement.

For example, Gang-A-Tsui Theater Nanguan Music Ensemble will perform "Zhuwen Elopes with the Ghost (朱文走鬼)," a piece combining the ancient theatrical genre of Liyuan opera with the Japanese dance style of butoh, which encompasses a diverse range of highly elaborate techniques and movements.

Taiwan Bangzi Opera Company will also stage another production for this segment called "Test the Wife! Murder the Wife! (試妻！弒妻！)" — an observation of human nature and how people behave in love and marriage.

In addition to classic and contemporary plays, the 2020 edition will also present two new experimental operas, including "Tsui (崔氏)" by Benshi Theatre Company (本事劇團) that explores the dilemmas shared by women from ancient and modern times.

Ticketing information and more can be found at https://festival.ncfta.gov.tw/2020tttf/.