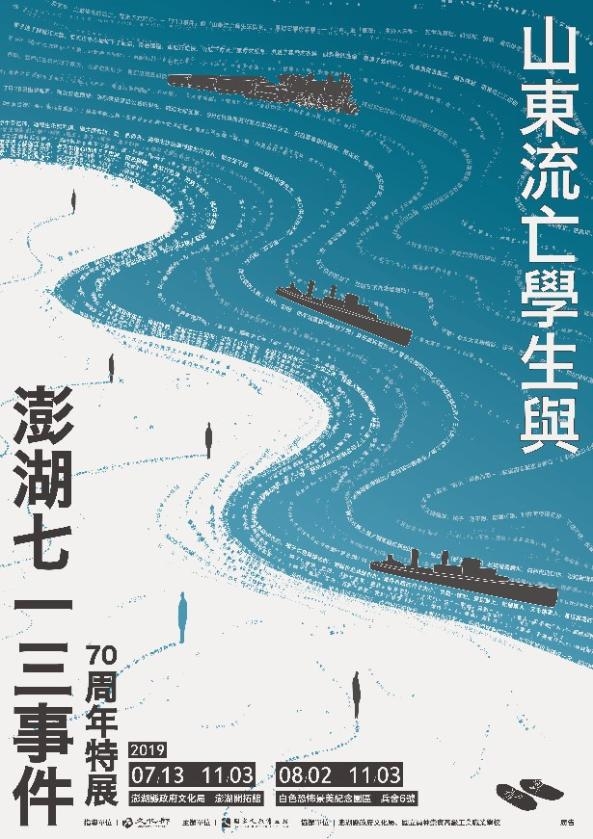 Curated by the National Human Rights Museum (NHRM), an exhibition commemorating the 70th anniversary of the "July 13 Penghu Incident (澎湖713事件)" is scheduled to take place at two locations this year — Penghu Reclamation Hall from July 13 to Nov. 3, and Jing-Mei White Terror Memorial Park in Taipei from Aug. 2 through Nov. 3.

The incident, which broke out on July 13, 1949 at the Penghu archipelago situated in the Taiwan Strait, saw many of the 5,000-some students and their school teachers who were fleeing the Chinese Civil War from Shandong Province killed by Nationalist soldiers due to their defiance against military orders.

According to NHRM Director Chen Jung-hong (陳俊宏), these refugee students wanted to finish their academic education through a "half-studying, half-training" program promised by the military. However, the military still started to forcibly conscript these students into army units as full-time soldiers, refusing their requests to study.

Angered by the conscription, the students launched protests, which antagonized the military and led Penghu Defense Command-in-Chief Lee Cheng-chin (李振清) to command his soldiers to attack the student leaders with bayonets. Known stabbed victims include Lee Shu-ming (李樹民) and Tang Ke-chung (唐克忠).

When several teachers and principals, including Tsou Chien (鄒鑑) and Chang Min-chih (張敏之), stood out to protect the youths, they were immediately arrested along with many of their students. The military falsely labeled them as spies working for the Communist cause, and the public executions and forced confessions in the months that followed became known as the July 13 Penghu Incident.

Those who survived lived to see their false convictions overturned, their names exonerated, and were granted compensation. In August 2009, the government also erected a monument at the Penghu Guanyin Temple (馬公觀音亭) to remember the reported victims of the incident that has been referred to as the "February 28 Massacre of Taiwanese Mainlanders (外省人的二二八事件)."

Chen pointed out that his museum is tasked with passing down the collective memories of Taiwan's historical events through various activities including exhibitions. He hoped that this event will help Taiwan's citizens learn more about the incident and the suffering that the refugee students had gone through, and prompt all ethnic groups in Taiwan to enhance bilateral understanding and dialogue while strengthening the nation's inclusiveness and shared prosperity.