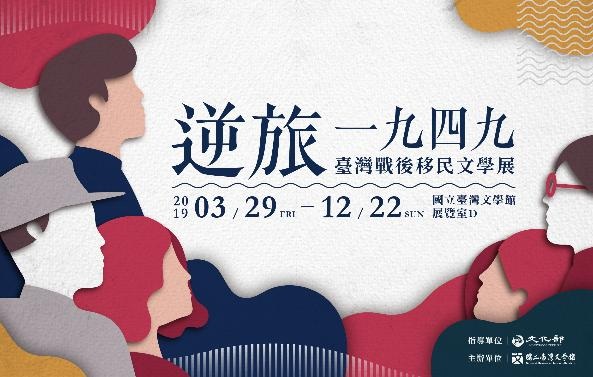 It has been 70 years since the Chinese Civil War, it is time for Taiwan to stop with the stereotypes of "the mainlander (外省人)" and "the old vet (老兵)." These mainland refugees experienced massive upheaval, yet continued on with their lives in a strange new land. "A Temporary Inn—1949" is an exhibition focused on post-war literature by migrants to Taiwan, running until Dec. 22, 2019 in Tainan. From the works on display, one can get a glimpse of the humanity, sorrow, and compassion of these people whose lives were dictated by the wheels of circumstance.

The focus of the exhibition is on so-called "mainlander literature," written by those who arrived in Taiwan some seven decades ago. The National Museum of Taiwan Literature has looked into the writings of these authors, seeking out the circumstances of these "mainlanders" at different stages by looking at the interactions among people from different provinces in China and Taiwan, and most importantly, how this was expressed in literature.

Through this, the museum hopes that people will be able to savor these authors' words, enrich their own knowledge, and gain new insight. When facing political issues, literature can help readers put themselves in the positions of others through its particular perspectives, helping ease the conflicts between different groups in Taiwan.

The name of the exhibition, "A Temporary Inn," is derived from ancient poetry. Take, for example, Li Bai's (李白) "Preface to the Feast in Peach and Plum Garden on a Spring Night (春夜宴桃李園序)," the first line of which says "The universe is a temporary inn for all living things. Time has seen the transit of hundreds of visiting generations."

Taiwan itself is somewhat of a "temporary inn," with all her residents having originated elsewhere — some more recently than others — throughout history. All who live here are, in some way, "visitors," drawn together by fate. This exhibition hopes to use writings, items, and manuscripts to help sketch out how those who came to Taiwan in the post-war period have interacted, both among themselves and with those who had come before, and to share their particular histories and experiences.

For this exhibition, the NMTL has enjoyed the help of several benefactors, including:

With documentaries and music accompanying the literary displays, the exhibition aims to help visitors gain a better understanding of the wealth disparity, class conflict, and conflicts of interest at that time. "A Temporary Inn—1949" is dedicated to the soldiers who thought they would be temporarily decamping to Taiwan in 1949, their families, their descendants, and every other group that lives alongside them on Taiwan.

More information on the Tainan-based literary exhibition can be found here.