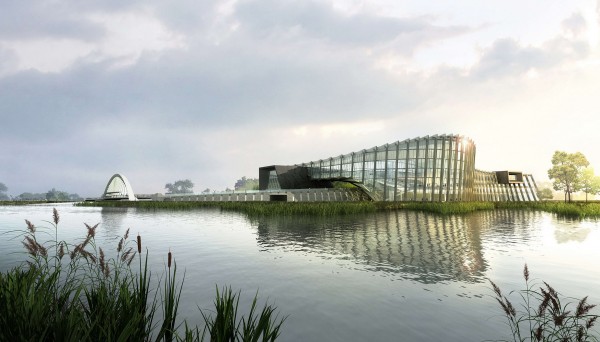 Billed as a "museum of Asian art and culture,” the Southern Branch of the National Palace Museum is a glittering 70-hectare facility dedicated to collecting, researching, preserving, and exhibiting artifacts and relics from across Asia.

While the National Palace Museum is home to the world's largest collection of priceless Chinese artifacts, in which over 600,000 items have to be displayed in rotation, the Southern Branch looks beyond 5,000 years of Chinese history, focusing instead on all Asian arts and culture.

Embraced by a lake overarched with cursive bridges, the Southern Branch also pays homage to ancient Chinese, Indian, and Persian civilizations by decorating its exterior with images of dragons, elephants, and horses.

Sporting a reception hall, a library, a children's creative center, and an auditorium, the Southern Branch offers larger display space and more modern facilities than its Taipei counterpart. The museum infrastructure and surrounding landscape are certified "green” and resistant to floods and drought.

The NT$7.934-billion (US$242 million)infrastructure project also boasts showcases that are 7.2 meters in height, enabling the museum to display many of its treasures that could not be exhibited in Taipei due to their length and bulk.

The branch museum took over 15 years to complete. The project was first initiated in July 2001 and officially opened on Dec. 28, 2015 to coincide with the 90th anniversary of the National Palace Museum.

The two signature collection items of the National Palace Museum - Jadeite Cabbage with Insects and the Meat-shaped Stone - will be displayed at the Southern Branch until October 2016.

The Southern Branch is also hosting two international exhibitions featuring Korean Goryeo Celadons and Japanese Imari porcelain. 2016 will see loaned paintings from Japan, and 2017 will include items from the Asian Art Museum in San Francisco.

The National Palace Museum is partnering with the Taiwan High Speed Rail (THSR) to introduce a package that will allow visitors to visit both branches in Taipei and Chiayi.

The Southern Branch is also offering a local tour package that will introduce travelers to the prominent museums of southern Taiwan, including the National Museum of Taiwan History and Chimei Museum in Tainan.

The Southern Branch is offering free entry for all visitors between Dec. 29, 2015 and March 31, 2016 during its trial run. However, visitors must pre-register at the National Palace Museum website: http://south.npm.gov.tw/en-US/TourReservation. Please provide your registration number upon arrival.