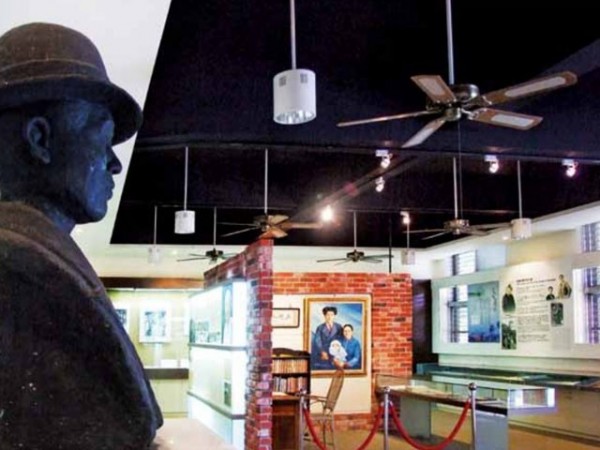 The Meinong District of southern Kaohsiung City offers awealth of resources that portray the beauty of Taiwan'sfascinatingdiversity. Among the cultural landmarks in the Meinong area, noneis more distinctive thanthe Chung Li-he Museum at the foothill of Lishan Mountain.

Lishan, where it all began

The life of Chung Li-he, an iconic writer of Hakka descent, wasbothtough and short, for hepassed away at the age of45.His literary legacy, however, remains as relevant and pertinent now as it was then.

Chung was born in the Gaohsu District of PingtungCounty in1915, during the Japanese colonization of Taiwan. Although he completed his studies in public school, he had the rare opportunity to be privately tutored in Chinese as well, giving rise to his bilingual capabilities and his future line of work in Chinese-Japanese translations.

At the age of 18, Chung moved to Lishan, a scenic mountain region in Meinong that is known for its agricultural output in apples, peaches, and pears. It was here, whileChung helped his father manage the family-owned Lishan Farm,thathe developed an interest in literature and started to work on literary projects. His pursuit was supported by his family, especially by his half-brother Chung Hao-dong (鍾浩東).

It was also at Lishan where the 19-year-old Chung met Chung Tai-mei (鍾台妹), a woman who worked on the family farm, was four years older than him, and had not received formal education.

Theirradical pairing brokemore than onesocial taboosince peopleof the timecould not marry someone of the same surname.As their union could not be accepted by their families, Chung left Meinong in 1938, and his wife joined him in Shenyang, Manchuria two years later.

Between 1941 and 1945, Chung, his wife, and their oldest son, Chung Tie-min (鍾鐵民), lived innortheasternChina. Chung worked as a Chinese-Japanese translator to supporthisgrowing familywhile writingto express his feelings about the turbulent era. He also published his first and last novel collection — 'Oleander' — on the eve of Japan's surrender to the Republic of China in 1945.

Upon hearing the news of the Chinese Communist uprising, the couple and their children returned to Meinong in 1946. Chung was employed by Pingtung Neipu Junior high school as a Chinese teacher, but soon afterwards he contracted tuberculosis and had six ribs removed.

During his convalescence, he fought to keep writing; Chung died on August 4, 1960, while editing his last work, "Rain.” The blood-splattered manuscript later became his first short fiction published in Taiwan.

Honored as a national treasure

Throughout his life of hardships, Chung was a prolific writer, producing more than 14 complete manuscripts during his 45 years. In 1955, he wrote hisseminal piece- 'Lishan Farms,' a fictional portrayal of his romance with an elder woman of the same surname, and the rigidity of the conservative Hakka community they dwelled in.

'Lishan Farms'received wide acclaim andwon second prize in the Chinese Literature Awards for novels. Although itwaslatertranslated and published in Japan, Chung never saw his favorite work published during his lifetime.

To commemorate the author and his devotion to literature, a group of Taiwanese writers initiated the project to erect a museum in his honor in June 1979, and it was completed in August 1983. The museum is located where Chunglived during his last years, and where he wrote most of his works.

To the citizens of Meinong, the Chung Li-he Museum also records the deepest meanings of Hakka literature and embodies the features of Hakka culture.The museum has come to serve as a symbol of the Hakka people's steadfast and persevering spirit, and is a great source of pride.