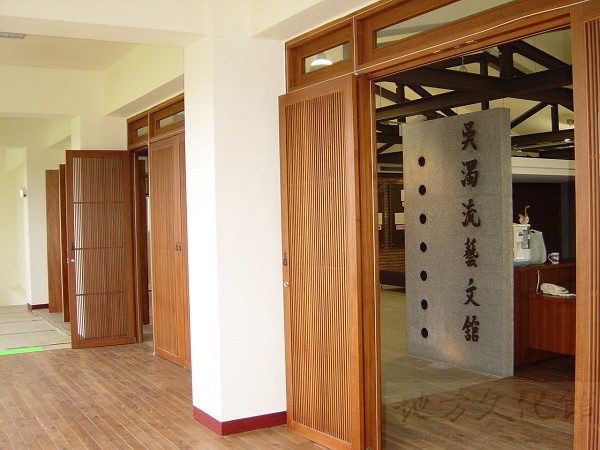 The Wu Zhuo-liu Literary Museum was established in 2003 to commemorate its namesake's literary contributions to Taiwan literature. As a new landmark of Hakka literature in Miaoli's Xihu Township, the museum strings together local art, culture, and landscape to promote new cultural and literary creations.

Born in 1900, Wu Zhou-liu was a prominent novelist, poet, and reporter of Hakka descent who served as a bridge between the Japanese colonial era and postwar Taiwan through literature. He was dubbed the "iron and blood poet" for his devotion to promoting Taiwan literature.

Xihu is where Wu wrote all of his literary creations. Upon moving there in 1922, Wu discovered his interest in literature, and started writing short stories that reflect Taiwanese people’s lives under Japanese rule, thus paving the way for his autographical trilogy — "Orphan of Asia (亞細亞的孤兒)," "The Fig Tree (無花果)," and "Formosan Weeping Forsythia (台灣連翹)," which offer insights into the agony and frustration of Taiwanese intellectuals who suffered under both Japanese colonialism and postwar conditions.

As the second hometown of Wu, the landscapes and people of Xihu were often depicted in his literary works to show his emotional attachment to this place. To reconnect Wu's life with Xihu, the Miaoli County Sihu Township Office commissioned scholars and historians to recreate the "literary hometown of Wu Zhuo-liu" by establishing the memorial museum.

Housed in the second floor of the Wuhu Community Center, the literary museum comprises a display hall and an archive room. The archive room displays Wu's manuscripts, old photographs, books, as well as literary creations and related cultural relics, including his most representative autobiographical trilogy and poetry written in Chinese calligraphy. The display hall, on the other hand, is dedicated to local contemporary writers and artists to showcase their works and encourage creative creation.

Walking through the door, one will first see a timeline and catalogue of publications by Wu. The museum lists major events in Wu's life in Xihu from 1922 to 1937, and displays his publications by date to offer a glance into Wu's personal history and creative process.

In addition, the museum also collects artifacts and cultural relics from the Qing dynasty and Taiwan's colonial era to offer glimpses of life under Japanese rule and the following era of transition. Combining the township's past and the contemporary with the legacy of the Hakka literary giant, the Wu Zhuo-liu Literary Museum has enriched the literary scene of Xihu.