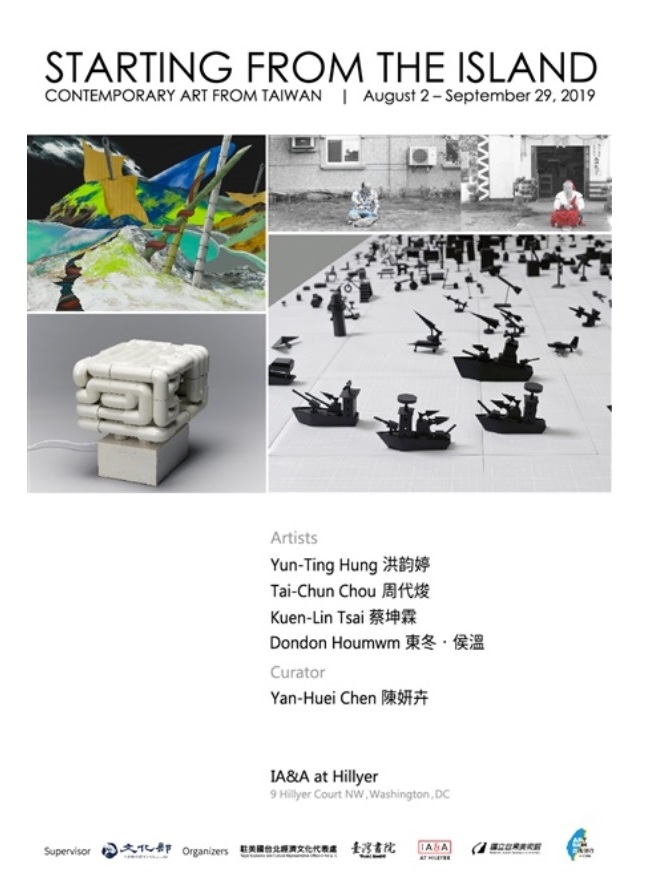 A contemporary art exhibition featuring four artists from the Art Bank Taiwan program will kick off at the historic carriage house gallery of IA&A at Hillyer in Washington, DC on Aug. 2. Featured artist Tsai Kuen-lin (蔡坤霖) will also be present at the opening reception slated for 6 to 9pm.

Curated by Chen Yan-huei (陳妍卉) of Art Bank Taiwan, "Starting from the Island, Contemporary Art from Taiwan" offers the perspectives of four artists who have combined their life experiences and personal observations on the sensory and informational overload of our contemporary world. As they compare and contrast local with global, insularity with overseas, and cities with mountains, the discussion stretches from uniquely regional issues to global phenomena. As such, viewers can partake in the artists’ ongoing dialogue with their surroundings through their art creations.

Born in Tainan in 1979, Tsai is best known for his artistic practice involving plastic pipes, wood, and canvas. The form demonstrated through these materials often showcases a "process" that invites audience participation. Therefore, his art never speaks out in a direct fashion, encouraging instead physical touch to help viewers develop somatic awareness and regain lost sensations.

Born in Tainan in 1981, Yun-ting Hung (洪韵婷) has long been fascinated by space and the human body. Her artistic practice focuses on elucidating the relationships among the human body, the physical venue, and the artworks on display in hopes of sending the viewers onto a journey of their own imagination.

Born in Hsinchu in 1986, Chou Tai-chun (周代焌) uses his art to explore the concept of "screen interface" — where people receive news of happenings around the world through their screens without being particularly careful about the authenticity of the information received. The reoccurring themes in his works are the transformation of landscapes, the 24-hour news cycle, and fragmented imagery propagated around cyberspace.

Born in Hualien in 1985, Dondon Houmwm (東冬侯溫) is a musician, performer, and artist from the Taiwanese indigenous tribe of Truku. To help revive the disappearing Truku culture, customs, and language, he presents contemporary aboriginal culture through music and performance art.

Featured artist Tsai will also hold a talk on Aug. 3 on his inspirations and creative process, in which he initiated an ongoing fieldwork archival project because his early education rarely delved deep into local cultures and he grew up knowing very little about Taiwan itself.

This exhibition is made possible with the support of the National Taiwan Museum of Fine Arts, which oversees the Art Bank Taiwan program, and the Taiwan Academy of the Taipei Economic and Cultural Representative Office in the US.

‘Starting from the Island, Contemporary Art from Taiwan’