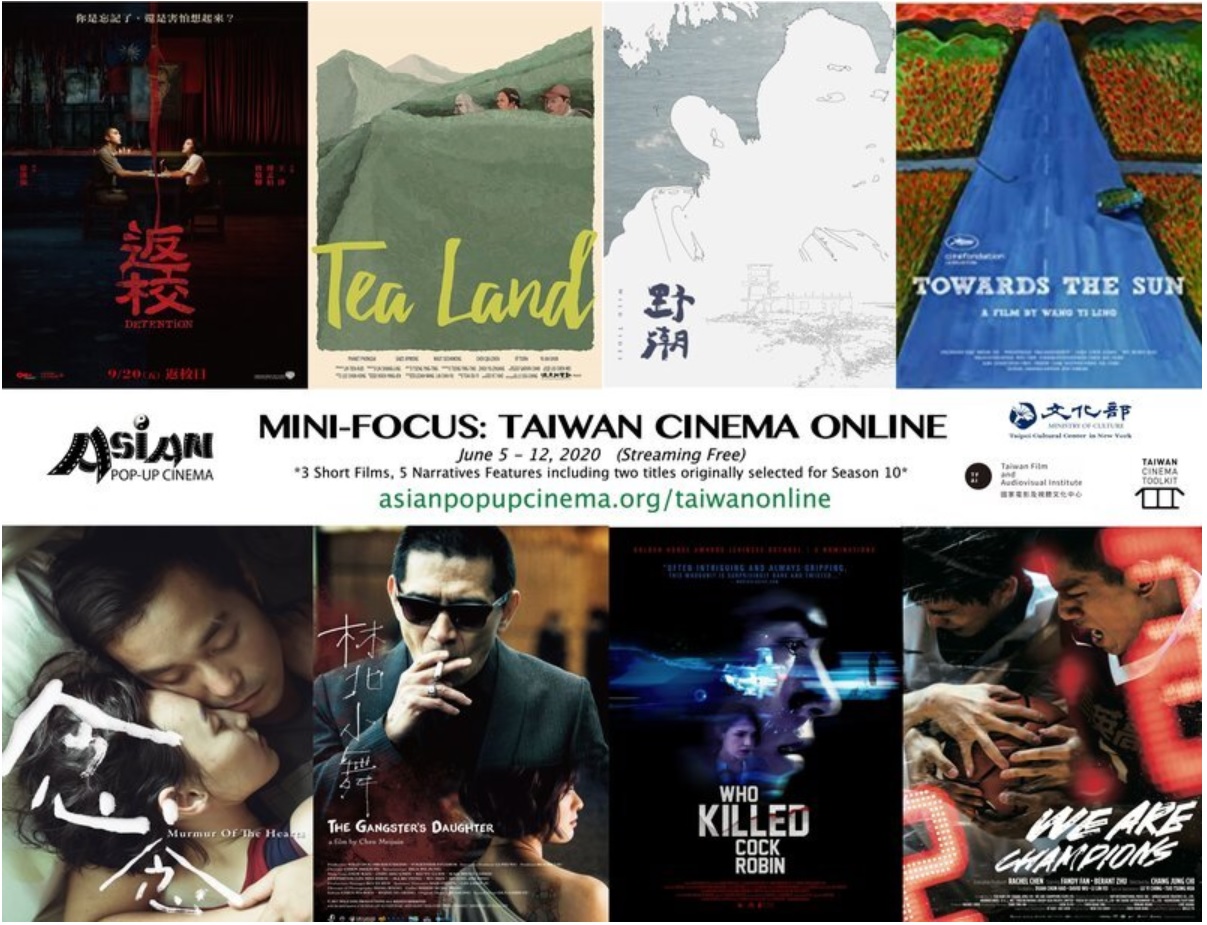 The Chicago-based Asian Pop-Up Cinema (APUC) has curated an online program titled "Mini-Focus: Taiwan Cinema Online" that focuses on contemporary Taiwanese cinema. Three short films and five narrative features from Taiwan will be presented for free from June 5 to June 12. "It's good to remind the public of alternative online content other than the mainstream choices" in this age of self-isolation, stated Sophia Wong Boccio, founder and executive director of APUC.

The Taipei Cultural Center in New York is very pleased to collaborate with APUC, Chicago's only pan-Asian film festival, and pointed out that in recent years, Taiwan film industry has continued producing movies with diverse subject matters and genres while new generations of young filmmakers came to prominence, together with an unrelenting generation of internationally renowned masters, enriching the domestic film repertoire.

The lineup of the free online program covers the highest-grossing domestic Taiwanese films that have also earned critical acclaim on the global film circuit during the past five years. In order to watch the movies, title by title registration is required. For more information, please visit APUC's official website at https://www.asianpopupcinema.org/taiwanonline/.

Director: John Hsu | Supernatural Psychological Thriller | 105 minutes
In 1962, a sense of desolation and tension permeate society. Fang, a twelfth grader at Tsuihua Senior High School, falls in love with Zhang, a counseling teacher. Troubled by the problems at school and home, Fang feels that Zhang is the only person who understands her. Longing for freedom, Zhang forms a study group with his colleagues and students, including Yin and Wei. Reading the banned books allows them to be liberated for a brief moment but at the same time, they put their lives in great danger. One day, Zhang vanishes into thin air, and only Fang and Wei, an eleventh grader, remember him. Together, Fang and Wei start looking for their disappeared teacher but find the school gradually slipping out of the world they are familiar with. Then in a realm dominated by ghosts and spirits, the pair are forced to face the terrifying truth...

TEA LAND (高山上的茶園)
Director: Tseng Ying Ting | 30 minutes
On a high-mountain tea farm, five migrants from Thailand and Vietnam longed to go home after years of illegal working in Taiwan. Having saved enough money, Hsin planned to get arrested just so that he would be repatriated. However, he was found dead after a farewell party. The workers panicked. The farm owner suggested that they keep Hsin's death as a secret if they wanted to stay to earn money. Chai was full of regret, thinking he had not taken good care of his close friend. Chai decided to bury Hsin on this foreign land but discovered that Hsin's savings were gone. Distrust started to rise among the workers. It turned out it was Hsin’s lover An who hid the money, in an attempt to keep Hsin in Taiwan. Now Hsin was dead, An tried to run away with the money, but was caught by Chai half way. In a rage, Chai hit An with a shovel. He dug Hsin’s body up, tied it to himself, and rode down the mountain on a luminous night. They were going home.

WILD TIDES (野潮)
Director: Lu Po Shun | 25 minutes
Teenager Bo-Yan goes around his local village asking people if they need help for the harvest season. But with his parents on the run from debt, no one wants to be associated with him. Only his best friend Howai lets him help out at his family's fishery. Howai's father entrusts Bo-Yan with a key to an oyster fishing boat, which they will need the next day. But when he accidentally loses the key, Bo-Yan must make a desperate search to find it and prove he's worthy of trust.

TOWARDS THE SUN (迎向邊疆公路)
Director: Wang Yi Ling | 20 minutes
In eastern Taiwan, fruit farmer Jia-Ming is forced to live in his truck after his home is foreclosed. On the road, he meets a young Vietnamese woman, A-Anh. Just divorced and with a resident permit about to expire, A-Anh is going back to Vietnam. Out of kindness, Jia-Ming offers her a ride to the airport, but things take an unexpected turn.

MURMUR OF THE HEARTS (念念)

Director: Sylvia Chang |Romantic/Drama | 119 minutes
The film is a tale about the hearts. The narrative weaves together the three main characters' - the siblings who were separated when they were young, and the bumpy relationship between the painter and her boxer boyfriend. Their actions and thoughts unveil dreamlike memories that awake many yearnings and unsolvable problems in their life. The murmurs flowing deep inside the hearts make the journey of consolation even more gentle and moving under the peaceful direction of Sylvia Chang. Playing the boxer is Joseph Chang also starring in two Taiwanese dramas: The Victims' Game & Nowhere Man currently available on Netflix.

Director: Chen Meijun with veteran actor Jack Kao & his young co-star Ally Chiu
Music by Lim Giong (The Assassin) | Drama/Crime | 105 minutes
After getting into trouble with a local bully, teenage Shaowu is sent to Taipei to live with her estranged gangster father, Keigo. He quickly takes to being a father and sets out go straight, but soon he is dragged back into the criminal world by corruption and a quest for vengeance that will decide both of their fates.

Director: Chang Jung Chi | Drama | 117 minutes
Born into the bottom rungs of society, two teenage brothers with nothing but each other hope to change their fate through their love of basketball. Little brother Tung Hao joins an elite school and transforms into a dazzling superstar; big brother Hsiu Yu ends up on a ragtag squad about to be disbanded, finding an unexpected new brotherhood in his never-say-die teammates. Eventually, the brothers' cross paths on their way to ultimate basketball glory — the HBL championship — where they will discover that some things are more important than winning.

Title by title registration is required. A special link (single use) w/promo code (to bypass the one-day rental fee) will be sent to you shortly before the start of scheduled stream time.

Stream time for all the films are set for CDT zone (2:00pm - 10:00pm). Please activate your link within 8 hours of stream time. Moreover, registrations are accepted throughout stream time. Upon activating your link, you can finish watching the films within 24 hours.

All films will be shown in Taiwanese dialects and/or Mandarin with English subtitles. Films shown are watermarked for extra security.

All titles accept unlimited registrations except for WE ARE CHAMPIONS (200 only); and DETENTION (400 only).