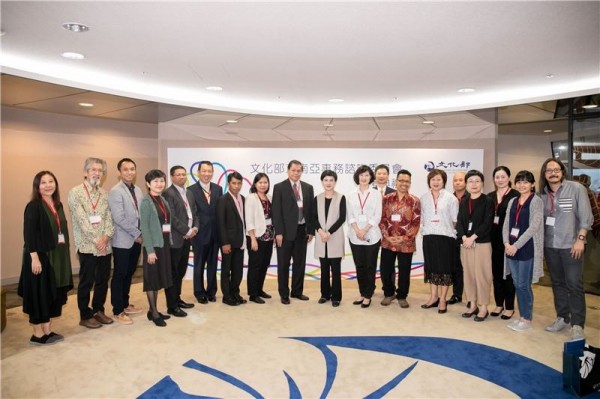 Minister Cheng noted that the committee is one of the cornerstones of its New Southbound Policy to promote cultural exchanges between Taiwan and Southeast Asian countries, and to set up mutually beneficial partnerships.

Established in 2015, the Southeast Asia Advisory Committee is a thriving platform for cultural exchanges. The 2nd edition of the committee is formed by eighteen professionals from the fields of arts, film, Southeast Asian studies, and literature and based in Cambodia, Japan, Laos, Malaysia, Myanmar, and the Philippines.

Japanese scholar Takashi Sakai (坂井隆) noted that not only is Taiwan part of Southeast Asia, Southeast Asian influences can be seen in Taiwan's everyday life, such as the Taipei Grand Mosque.

Ajarn Pawit Mahasarinand, chairman of the Chulalongkorn University's Department of Theatrical Arts, and Mohd Khair bin Ngadiron, director of the National Library of Malaysia, expressed their hope for more collaborative opportunities with Taiwan in the future.

Rina Tsou (鄒隆娜), a Filipino-Taiwanese filmmaker and fellow committee member, expressed her hope to use this cultural exchange experience as inspiration for future films.

As 2017 year marks the 30th anniversary of the lifting of martial law in Taiwan, the Ministry will arrange for the committee to visit the National Human Rights Museum and the 228 Memorial Museum, which will allow the members to learn more about Taiwan's past history and hard-earned democracy.

The Ministry is also offering film screenings, salons, forums, and speeches for the public to gain a deeper understanding of Southeast Asian cultures and forge closer ties. Click here for information on the April program celebrating Taiwan-Southeast Asia ties or download the full English program below: