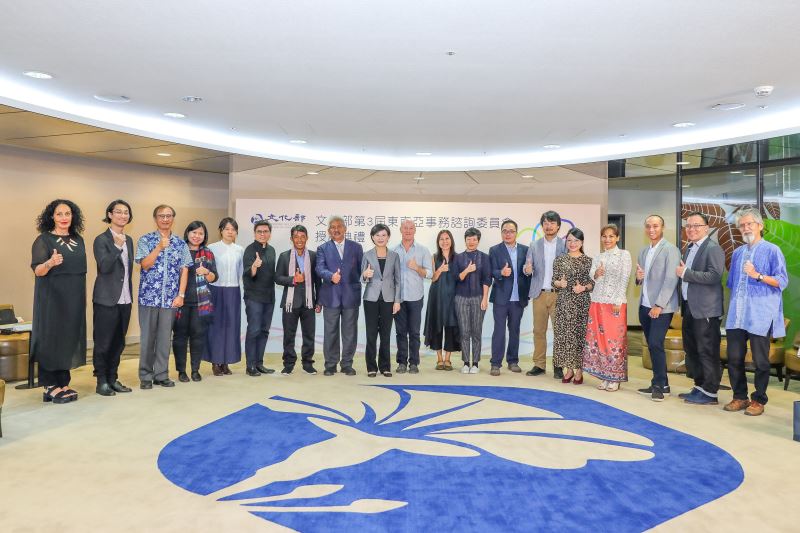 Minister of Culture Cheng Li-chiun met with an international panel of cultural professionals in a week-long program this June to discuss promoting deeper understanding between Taiwan and Southeast Asia.

The Southeast Asia Advisory Committee was launched in 2015 by the Ministry of Culture to foster closer, longstanding cultural ties with neighboring nations through people-oriented exchanges. Leading professionals working with culture and the arts in Taiwan and Southeast Asia are invited to meet, discuss views, and hold dialogue on subjects pertinent to the regional development of culture.

The third edition of the Committee is joined by 18 members from Cambodia, Indonesia, Japan, Laos, Malaysia, Myanmar, Singapore, Taiwan, Thailand, Vietnam, and the Philippines, New Zealand, and Australia, with the latter two nations included for the first time this year to expand upon the scope of exchanges.

Members flew in from 13 nations to attend the inauguration ceremony in Taiwan on June 11 and a week-long series of film workshops and cultural salons with the Taiwanese public. They also met with representatives from the newly launched Taiwan-Asia Exchange Foundation (臺灣亞洲交流基金會) and toured the nation's largest cultural infrastructure project in recent years ― the National Kaohsiung Center for the Arts.

In meeting with the Minister, members discussed the re-construction of Taiwan and Southeast Asia's art history, the preservation of Austronesian heritage, and the viability of transforming Taiwan into an international outpost for global non-profit organizations and cultural institutes.

Minister Cheng pointed out that such dialogue and feedback have helped to formulate recent initiatives including the Youth Cultural Gardeners program, which facilitates bilateral exchanges among youths from Taiwan and Southeast Asia, and the opening of a Taipei branch office by global arts organization Living Arts International.

Next year's objectives include the joint exploration of innovating traditions, harnessing technology for culture, and spearheading transnational initiatives for sustainable heritage preservation and revitalization. To ensure the accumulation and inheritance of experience, tenure has also been extended to two years.

Under the nation's flagship New Southbound Policy, the Ministry of Culture looks forward to enlarging Taiwan's scope of cultural exchanges with Southeast Asia, New Zealand, and Australia upon shared historic similarities, such as seafaring origins and vibrant indigenous heritage, and a common pursuit of artistic and creative freedom.

English information on committee members can be downloaded in PDF form below.