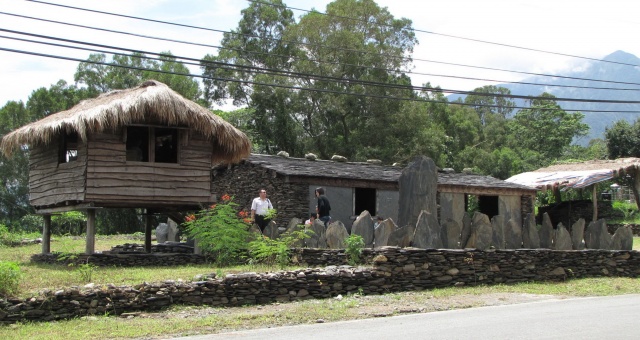 The aboriginal Paiwan and Rukai communities had a clearly defined caste system consisting of royalty, nobility and a working class. More importantly, however, was their following of the so-called "house society” social structure, in which all those who were born under the same roof were considered relatives and part of the house family. The name of the house is then taken as surname.

Given this emphasis on the residential complex, is it no wonder that they went to great lengths to complete each building in their village. One well-preserved village still stands today; known as the Laochijia Village, it can found at the Chunrih Township of Pintung County. At 115 meters above sea level, it is the most comprehensive cultural site of its kind and comprises of nearly 50 slate constructions.

The Paiwan-style slate construction was made with stones from the riverbed and logs from the nearby forest. For the Laochijia Village, the closest source of quality stones was the Chijia River, which was a two-hour hike away. After the procurement of raw materials, the villagers would then sand the stone slabs, clear the land, fill the walls with mortar, insert the ancestral pillar, and pile the rooftop with stone slabs in a layering pattern that make the slabs appear like fish scales.

When completed, each stone house was supported by 7 beams, fronted by a yard and included a front room, a bedroom, a living room, a storage shed and a pig pen. The cooking area would be close to the living room in the middle of the house, while one could identify where the tribe's leader lived by finding the house with a platform in the front yard. The platform was used for issuing public orders and hosting harvest festivals.

One ingenious design of the Paiwan-style slate house is its low entrance door. It was designed as such not only for defensive purposes, but also to commandeer respect from guests, who had to bow their heads as they entered through the door. For preserving the wisdom and resourceful lifestyle of these aboriginal ancestors, the slate construction settlement in Pingtung has been included as one of the 18 potential world heritage sites Taiwan has to offer.