'The Only Way to Survive the Jungle Was to Be Captured' 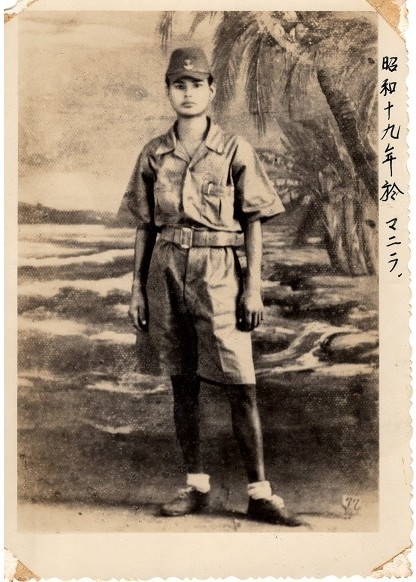 ‘The Only Way to Survive the Jungle Was to Be Captured'

I was born in 1926 in Puzih, Chiayi County and I am a survivor of residual troops of the fourth group of the Japanese Navy Special Volunteers in Manila, the Philippines.

Our family was poor when I was a kid and I went to the Ching Chun Hospital, next to the Mazu Temple on Kaiyuan Road in Puzih Township, to learn from Dr. Cheng Chao-ching how to become a health care assistant right after graduating from elementary school at the age of 14.

I mostly helped with passing the needle and dispensing medicine. The doctor told me that I had "sharp eyes,” meaning that I was very clever! Because he only had to signal me with a look, and I knew exactly what medicine he wanted to use. He often praised that I was even sharper than his apprentice.

Although I did not read many books growing up, I was able to understand Japanese books at a glance even without being taught, probably because of my "sharp eyes”!

I Went to the Battlefield for Money

When I was 18 years old in 1943, Japan was recruiting health care assistants to serve in Southeast Asia. My family was impoverished and a health care assistant would be paid 60 dollars a month, the equivalent to a teacher's salary, which was quite a high income at that time. So I went to sit for an examination simply for the money even though I understood that I would have to go to the battlefield if I was recruited.

Maybe I was too young to understand the terribleness of war at the age of 18, and there was the draw of being paid several times more than that earned by a blue-collar worker. On top of my medical and health care knowledge, I could speak Japanese quite fluently and I had learned some English when I interned at the hospital. Therefore, I was recruited.

On July 27 of that year, I boarded a transport ship in the Port of Kaohsiung and arrived in the port of Manila in the Philippines after an eight-day rough sail.

Under Siege at the Manila Military Airport

My ill fortunes kicked in on the minute I boarded that ship. More than two hundred people in my boat became infected with malaria on the way and the eight-day boat ride can only be described as "terror-stricken.”

After arriving in the Philippines, I was assigned to the Manila military airport as a health care worker to care for wounded soldiers. At that time, there were air raids almost every day and the Japanese troops had been really good at knowing when the enemy was coming even before air raid sirens sounded and before enemy aircrafts were sighted.

Every day we heard the loud thud of bomb explosions and sometimes we could even hear them unload the bombswhen enemy planes came too close to us. The loud bomb blasts made us feel that our hearts were going to pop out. Each time after the air raid alert was lifted, we would return to our work post to continue our health care work.

In October 1944, I was ordered to lead more than 30 injured soldiers to another island. Because the U.S. B-29 air fleet carried out a large-scale air raid every day, we were forced to stop many times along the way to avoid air strikes. We had to find shelter to rest during the day and marched 20 kilometers at night.

Due to a shortage of water and food, we could only feed ourselves with an allocation of two rice balls a day. In the end, we were forced to steal corn from farm fields to eat when marching at night. It was not easy to cook corn cobs and sometimes we had to wait a long time before we could cook through them.

At that time we only had one set of clothes to wear, so we could not change clothes during the escape. When we did encounter a source of water, we would wash our clothes while taking a bath. Who cared whether we took a bath or not during the escape? To stay alive was the most important thing!

Posing as a Prisoner of War

The war situation worsened day by day and the Japanese troops were retreating in defeat. Starting from November 1, 1944, I took my team members into the mountains, beginning the most painful days of escape. During this period of time, each one of us had to think of a way to struggle for survival while fleeing in different directions.

I sprained my spine during an escape and felt severe pain with every step, so I thought I would rather die then and there. We did not have anything to eat and we could only watch as American planes flewacross the sky.

One day I saw an American soldier approaching from a distance;I pretended to be a Japanese soldier and allowed him take me captive to finally endthe terrible days of escape. U.S. forces were treating prisoners of war very well, and they realized that I was not a Japanese soldier after I wrote my Taiwan home address when filling out paperwork.

On February 19, 1946 I was repatriated by American forces, and I knew my nightmare of three years in Southeast Asia finally ended at the moment when I landed back in Taiwan…