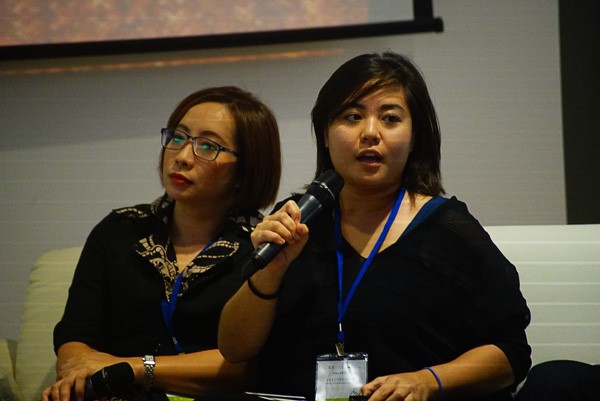 Lisa Ahmad's presentation began with a brief introduction to the Kaleidoscope Studio, which she opened in 2013. It is the first art space run by artists in Brunei and aims to promote art, nurture talent, and raise awareness of the importance of art and artists. Ahmad went on to talk about her home country, Brunei: its geographical location, population, languages, museums and institutions of arts and culture, and its traditional crafts, such as rattan-weaving, silver-crafting, textile-weaving, and wood-carving.

Artists in Brunei face many challenges, one of which is "black out days”. For six to eight months of the year, the people of Brunei are not allowed entertainment in the form of performance, dancing, or singing. Another challenge is censorship, which makes it impossible for artists to comment on traditional culture, religion, or the monarchy. Anyone who wants to organize an art or cultural event must apply for a government permit, which comes with hefty fees.

As in many other countries, facilities are inadequate and opportunities for young artists are scarce. There are few channels for information sharing, making it hard to know what other groups in Brunei are doing. Another issue is the perception of art, especially among the older generations. While young people are more receptive, older people tend to view art negatively. Lack of funding is probably the biggest hindrance of all.

In order to make art more accessible to the public, Ahmad's studio has organized several exhibitions focusing on community engagement and interdisciplinary collaboration. The exhibitions experimented with various forms of art in combination in an effort to attract people with different interests and to show the people of Brunei the diversity of art. An exhibition called "Expression” even included a contemporary dance performance. 'Identity' was a performance exhibition where cosplayers, fashion designers, and special-effects artists were invited to role-play, create garments, and work in the studio. The studio has also worked with international photographers, organizing both exhibitions and workshops. Other forms of art the studio has experimented with include edible art (cake and confetti), fashion shows with music, and poetry slams.

Two years after opening, the studio is rethinking how they do things, making plans to better fill the gaps in funding, facilities, synergy, and information flow. They hope to create independent funding for their artists so that they no longer have to rely on government money for projects, which would allow the studio to continue to grow and roll out more artist residencies and exchange programs. Their goal is to enable effective, interdisciplinary connections and meaningful, face-to-face exchanges between artists. They are also planning to start campaigns and petitions against black-out days and the hefty permit fees, to introduce mentoring programs, and to collaborate with private companies. The studio is working to create public art spaces and make art more accessible, while also enlisting the help of owners of buildings and spaces to get their artists' work out in the open for everybody to enjoy.