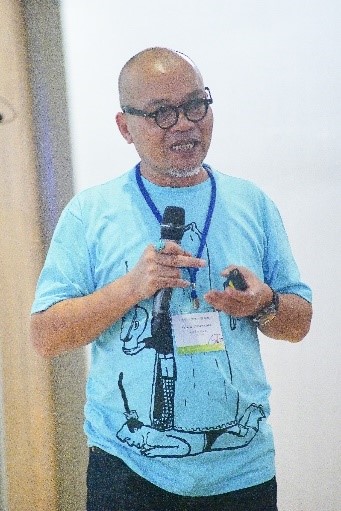 When Thanom Chapakdee visited the 2015 Asian Biennial at the National Museum of Fine Arts in Taichung, he asked the curator why the artworks had been put in a museum as art is a living thing and should be brought out from within the dead walls of a museum into the community.

This is probably why his art project is all about community. Over the past ten years, he and his students have worked with the Bru people, Vietnam War refugees who settled along the Mekong River near the border with Laos because they were denied entry into Thailand. Even today, the Bru people still have no identity in Thailand, and up until very recently they and their children had no access to formal education or medical services.

Chapakdee said that unlike artists, whose projects center on their art, he as a cultural worker puts the village or the community at the center of his work. For five years, his team conducted regular visits to Tha-Long Village, observing their rites, rituals, ceremonies, and way of working. For example, every year around June, before the monsoon season, the villagers go to the jungle near Mekong River to give sacrifice to the Divine and use the sacrifice to augur the scale of the coming monsoon.

Chapakdee stressed the importance of artists who work with communities respecting the source of their inspiration, and he lauded Taiwan's Ministry of Culture for understanding that culture comes from the grassroots.

Chapakdee compared his project with that of Navin Rawanchaikul, who also worked on a project with communities (in Lamphun Province) to honor venerable Thai artist Inson Wongsam.

The younger artist traced Wangsam's motorcycle journey from Thailand to Italy, exchanging objects with village people along the way. Similarly, Chapakdee's project encourages students to study the objects people use as a part of their way of life. Villagers are encouraged to work hand in hand with each other to transform objects for rites and ceremonies into objects of art. Art has become a community engagement that is at once practical, religious, and aesthetic. He calls this his 'Art of Engagement”, a community-based relational art that celebrates relational aesthetics.

Tha-Long Village is not the end of the story. Chapakdee has travelled to Cambodia to work with a community near Laos and is currently researching Molam music, the Isan people's folk songs about daily life.