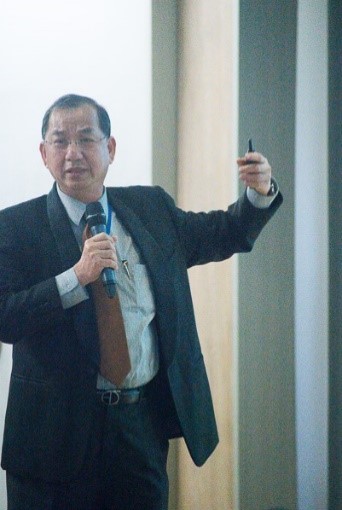 Hin San Goh's devotion to Malaysia's culture industries has won him the honorific title Datuk. He has worked as a consultant to Media Prima, Malaysia's biggest media group, leading the group to innovate its content, and he now works at Malaysia's Han Culture Centre, directing a research project on the Chinese Buddhist monk Yijing, who travelled the Maritime Silk Road to Malaysia during the Tang Dynasty.

Hin San Goh's presentation defined the creative industries as a broad range of activities including broadcasting, film-making, and music or digital content creation. He sees these industries as full of potential, where a small idea can work magic. For example, the Malaysian animated television series Upin and Ipin: since the series was introduced on one of his group's television channels, the eponymous cartoon's five-year-old twins, Upin and Ipin, have won the hearts of children not only in Malaysia but also in neighboring countries such as Indonesia, Thailand, Brunei, and Singapore., attracting more than 12 million likes on Facebook and leading to online and physical stores for Upin and Ipin products.

Hin San Goh pointed to the long-lasting popularity of Disney cartoons and the revenue they have created all over the world. Just as Disney has contributed to US cultural influence, the success of South Korean pop culture has also strengthened this country's international presence. Hin San Goh encouraged everyone at the forum to think what Han Chinese people could do to catch up.

Realizing the importance of the media's role in promoting culture, Hin San Goh founded the Chinese Film Association of Malaysia, the organizing body of the Golden Wau Awards, which recognizes outstanding Chinese-language films and workers. Under his leadership, Media Prima started to invest in Chinese-language films and television shows and to support talent. Hin San Goh proudly tells the audience that a Malaysian actress who won the 2013 Golden Horse Award for Best Supporting Actress actually started her career on one of the groups' television channels.

Language education is another area that is full of potential. The UK has a long history of promoting its language and culture through British Council offices around the world. In recent years, China has also been setting up Confucius Institutes. The Han Culture Centre, where Hin San Goh works, is also devoted to promoting Mandarin language learning in Malaysia. As the only Chinese-teaching institute recognized by the Malaysian government, it offers language classes to civil servants, runs Chinese proficiency tests, and teaches useful Chinese phrases in Berita Haria, a mainstream Malay newspaper. Other areas worth tapping into include Malaysia's culture of Gambir planting and the story of Hang Li Po, a (legendary) Chinese princess married to a Malay Sudan.

Culture industries start with ambition and cannot be successful without an understanding of what the market wants. If we want to turn culture into a value chain that goes all the way from the ideas in our heads to products on the shelves, we need support from the government (for infrastructure), the private sector (for funding), and academia (for research), and we need these partners to work together.

At the end of his presentation, Goh added that in his promotion of creative industries in Malaysia he has borrowed a lot of ideas and practices from Taiwan. Since Taiwan enjoys a rich Chinese culture and is supported by high-quality Japan-style customer service and openness to Western ideas, he has high hopes that it will become a leader in exporting Chinese language and culture across the world.