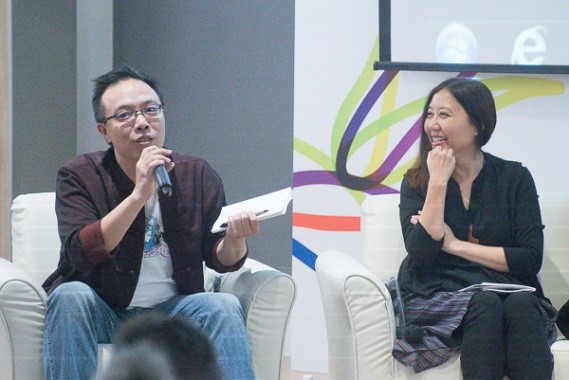 Shefong Chung, one of the session's moderators, shared her personal story with the audience and spoke of her intimate relationship with Southeast Asia. Laos has been her dream land since she was a child because many of her relatives were ethnic Chinese people who moved from Laos to Taiwan in the 70s and 80s, and their stories of Laos became her bedtime stories. As a teenager, she spent most of her time in Singapore and thus has always felt a connection with Singapore and the neighboring Malaysia. Brunei is a country to which she has dreamed of going since was fifteen, though she hasn't made it there yet. She did, however, go to Thailand, where she became a long-time friend of Chapakdee and now works a lot with Thai musicians and artists.

Cheng Chang, the second moderator, believes that Southeast Asia is more than Taiwan's neighbors: it is also a part of Taiwan, as Taiwan is now home to 600,000 Southeastern migrant workers and 200,000 immigrants who have married Taiwanese people. He points out that Taiwan's strength lies in its open and diverse culture, incorporating aboriginal, Chinese, Japanese, and Western cultures. Our aboriginal peoples, he added, are ethnically related to the Austronesian peoples of Southeast Asia. Culture is the best diplomacy, and these 800,000 people from the Southeast could all be ambassadors for Taiwan. As for formal exchanges, Cheng suggests that the Ministry of Culture, which currently has only one office in Southeast Asia, should send a representative to each of the countries in the region.

In response to the presentations, Shefong Chung asked the speakers to elaborate on difficulties arising from political or religious factors as they work to create more public spaces. A similar question was raised by a member of the audience, who wanted to know more about the biggest challenges they faced when promoting art in their countries and how they set up platforms and found resources to encourage their artists to work with artists from around the world.

Chapakdee said that lack of public space for dialogue and free expression through art is a major issue in many Asian countries, where the concept of freedom of speech often still does not exist. This is particularly true in Thailand because of the monarchy. He stressed once again that museums and art galleries are not public spaces and that artists have to think about how to challenge the government and the military. A related issue is how artists are isolated by neoliberalism, which takes them away from their society, making them conservative and sometimes nationalistic.

Chapakdee agreed with Cheng Chang that culture could serve as a bridge between people, and he supports the idea of building platforms for ASEAN countries. However, he also cautioned that ASEAN is a complex, multi-layered entity with many ethnic groups; therefore, players must be clear about what they are going to do and with whom.

Heuangsoukkhou believes one of her major tasks is to push her artists to depart from their old thinking, to create more artwork, and to speak to the audience. Finding a public space in Laos is not easy because of censorship. Heuangsoukkhou described her experience applying for government permits for public events: her association spent almost a year applying for a license to use a landmark for the "Light it up Blue” event to celebrate the World Autism Awareness Day this April, but the application was rejected by the government. "This shows the difficulties we face as a local non-profit organization,” she said.

Goh praised Taiwan's rich Chinese culture once again, saying that while Chinese culture is everywhere in Taiwan, ethnic Chinese people are a minority in Malaysia and so they have to work hard to preserve their culture. He suggested Southeast Asian countries should work together, with the help of the Ministry of Culture and other Taiwanese arts and cultural institutions, to build "a culture of harmony and inclusiveness”. Later in the session, Shefong Chung commented on this suggestion, saying that she prefers the idea of "networking” or "learning” to "help” because she does not believe Chinese culture is superior to other cultures.

Someone from the audience asked Ahmad about the current art scene in Brunei and its relationship with politics. Ahmad said she feels Bruneian artists are divided: older artists who work with more traditional art forms and themes enjoy more opportunities to travel around Asia on government projects; moreover, many people in art circles are engaged in petit rivalry rather than cooperation. She stressed again the importance of creating a synergy enabling everybody to work together. Another hindrance is the public perception of art: many people view art as a waste of time, so some parents do not allow their children to study it, and the younger generations are not exposed to art. Performing arts are more accepted because of media coverage, so there are more musicians, dancers, and drama students than visual artists. This is why Ahmad asks musicians to take part in audio-visual projects—to attract more people to the visual arts.

Chang shared his thoughts on previous remarks about freedom of speech, saying that unlike in Thailand or Malaysia, people in Taiwan can say anything they want, but that sometimes what they say is full of bias and discrimination, which is something that cannot be solved without better understanding of and respect for other cultures.

In her conclusion to the session, Shefong Chung brought up the issue of identity, which had arisen in some of the presentations and in her conversation with Ahmad about identity crisis in Brunei. Chung believes that sometimes creativity comes from "the undefined”, so people should be more open to it. A good example is film director Tsai Ming-liang and other Malaysian Chinese artists in Taiwan, who have produced some of Taiwan's best films and works of theatre. Her view was later echoed by Ahmad, who said she often tells her artists not to complain about art's short history in Brunei, but should rather seek to create a new identity by looking into themselves and their creations.