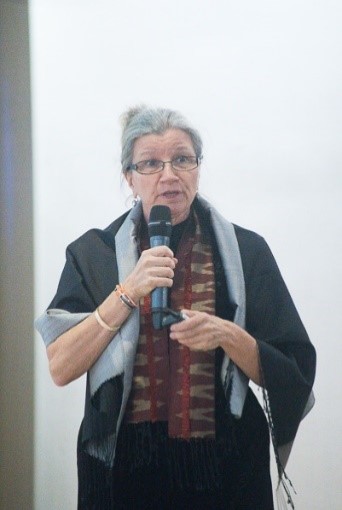 Carol Cassidy is a professional weaver who studied in Norway and Finland, where she learned from a variety of indigenous cultures in a contemporary art setting. For much of her life Cassidy has been immersed in textiles and for the past 25 yea she has been working in Laos (and later also in Cambodia) to keep the weaving tradition alive and help the art to be recognized as a national treasure. She mainly works with indigenous and minority groups whose weaving traditions and cultures are gravely endangered.

She points out that handmade textiles are very important because they are signs of the group's identity—the techniques, materials, and colors used in a piece of weaving tell a specific story about the weaver and her people and culture. Currently, Laos has about 49 ethnic groups, many of whom have their own distinct textile cultures and patterns that influence the way they interpret patterns and how they wear fabrics. The weaving tradition is still alive today, and pattern interpretation is being transformed as outside influences begin to penetrate the Laotian culture.

When she first arrived in Laos in 1989, Cassidy's first collaborations were with Laotian farmers who were already involved in sericulture. Her goal was to use as locally sourced raw materials as much as possible and to build on the local culture. These collaborations later led to a product line called 'Mulberry Farm—Pure silk, pure Laos'. This line has not only given women in the village the opportunity to earn additional income but has also revived and preserved traditional patterns and skills.

Weaving technology here is very simple: weavers use traditional Lao looms and practice a variety of techniques, both traditional and contemporary. Cassidy continues to look for ways to take traditional techniques and make them contemporary and relevant to the modern world, for example by collaborating with interior designers and architects. The weavers on the project weave about 1-3 cm per day, as this is not a mass production organization. Color pigments are also mixed by hand, and dyes may be indigenous or synthetic.

In addition to preserving traditions through actual weaving, the project also has a mission to help educate local schoolchildren and Lao people around the world, teaching them about their culture and about current affairs.

In later years, Cassidy has expanded the scope of her work to include northern Cambodia, where she works in an extremely remote area with a group of landmine survivors, mostly disabled farmers who now use technology to raise mulberries and make dye. This project is also a source of income for local women, and now their products can even be found for sale in the Guggenheim museum. Recently, Cassidy has been working with indigenous people in Northeast India, where the traditional culture is under serious threat.