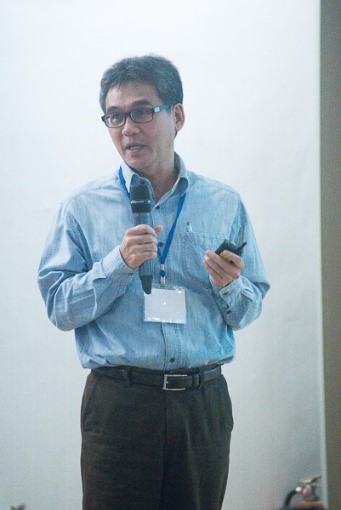 Marco Kusumawijaya is the director of the Rujak Center for Urban Studies in Indonesia. For the past 10 years, he has been working on three main areas, community, environment, and culture, which he says are closely interlinked, because the community interacts with the environment via culture, and the environment is the material basis for the culture. For Kusumawijaya, without bio diversity, there is no cultural diversity.

Kusumawijaya explains that the decision to focus on society at the level of "community” is intended as a critique of the scale of the state and the market. It forces us to acknowledge our solidarity with others and the limited nature of resources and to make necessary changes. Unlike an individual, a community is a manageable and concrete field or scale for change and new ideas. Such changes require creative reflection and invention, and that calls for arts and culture. Kusumawijaya also agrees with the WWF that the economic domain should be seen as lying within the social and ecological domain.

Kusumawijaya's independent work is usually related to his training: architecture, habitat and urbanism, arts, craft, and culture. In 2012, he began building the Sustainability Learning Center Bumi Pemuda Rahayu ("the well-being of young people”), a place where young people can experiment with art. Every year they invite five young artists between the ages of 18 and 35 to work and live there for two months. (They are currently on the third year.) There are only two rules resident artists must follow: they have to work with local communities, and they must work on ecological issues. The founders started the program because they were curious to see how artists and cultural workers would interpret 'community' and 'ecology'. This year, they also added an international residency to the program, so one of the five artists for this cycle is from Japan.

During his presentation, Kusumawijaya encouraged members of the audience to apply for the program. The application period begins in July or August, and the program takes place between October 15 and December 15, which is also the planting season in the Javanese calendar, so artists can observe the changes throughout the planting season.

Other significant projects by Kusumawijaya include the reconstruction of 23 gampongs (neighborhoods) after the 2004 tsunami. The project lasted 18 months, was carried out between 2005 and 2007, and involved the comprehensive reconstruction of the seven kilometres of coast line which were hit hardest by the tsunami, rebuilding not only houses, but also community life. Many cultural programs were also carried out, including mapping local cultures and ecological features. Currently, the center is trying to transfer the knowledge to the Philippines in order to help 700 families there.

Kusumawijaya was recently elected chair of the Jakarta council, so he writes about arts and the city. One of the major events he has organized is the Jakarta Biennale XIII, 2009—the first international biennale in Indonesia. This event was an outdoor display to show arts in a public space.

Kusumawijaya also manages the SAM Fund for Arts and Ecology. In 2014 he organized the Artists Expedition to the Indonesian Eastern Islands, Liwoto Pasi. The expedition lasted for two weeks and involved 13 artists. The goal was to see how artists map culture and artistic works existing in those areas together with local communities and then to try to create new artworks.

He was chosen to be a member of the Policy Unit 2 of the Habitat III (a conference held every 20 years). The unit is tasked with recommending policies to the social and cultural urban framework area for the next 6 or 7 months.

At the end of his presentation, Kusumawijaya encouraged the audience to offer suggestions and observations on issues such as how to treat cultures in the next 20 years.