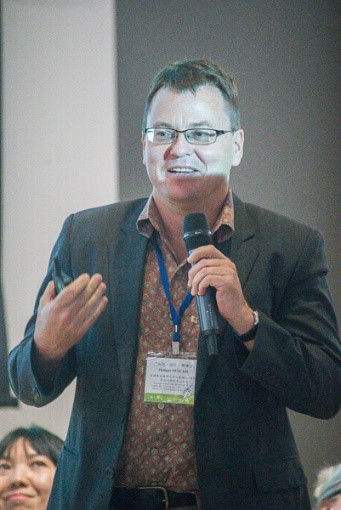 Philippe Peycam is a French historian based in the Netherlands whose studies originally focused on Vietnam and who for the last ten years has worked in Cambodia, where he founded the Center for Khmer Studies.

Peycam's presentation began with a brief introduction to the history of Cambodia. Present-day Cambodia is the product and victim of an ambivalent colonial legacy that has led to the subjugation of the intellectual and cultural landscape. The reification of the notion of the Cambodian "nation” is strongly linked to the image of the powerful Khmer (Angkor) Empire that was dominant in Southeast Asia between the eighth and fourteenth centuries. Modern Cambodia still carries the burden of this great and glorious past, which had a detrimental effect on post-colonial leaders, who felt an obligation to identify themselves with the great legacy of Angkor. This led to a very harsh form of nationalism and many unfavorable consequences.

The effects of the genocide lasted for many years after the end of the Khmer Rouge period. With the end of the Cold War and UN (UNTAC) intervention, Cambodia entered a phase of neo-liberal so-called "democracy”. Today, the continuation of political instability and social economic disparity can still be seen in Cambodia—in Phnom Penh, 13,000 people are forcefully evicted every year—the past is still there. On the other hand, we also see the resilience of the Cambodian people. Even before the UN intervention, a number of Cambodian intellectuals and artists held themselves aloof from political cooption.

At a time when the country was on the verge of disappearing, they struggled to keep traditional culture and arts alive. One of the major projects from this time was the predecessor to CEDOREK (1978-92, founded by Nouth Narang, Cambodian ambassador to France). This revival of dance, music, visual arts, and literature in a completely politics-free environment was a precursor to many independent projects in the mid-90s.

The following independent projects were mainly organized by displaced Cambodians with no national/government involvement: the Reyum Institute of Arts (1998-2009), founded by Ly Daravuth and Ingrid Muan; the Bophana Centre, founded in 2005 by film director Rithy Panh to bring audio and film culture back to Cambodia; Project SIPAR (2002) which promotes reading; Cambodian Living Arts (1998), which attempts to revive the performing arts; and the Institute of Khmer Traditional Textile (1994), created by Japanese weaver Kikuo Morimoto.

The Center for Khmer Studies (CKS), with which Peycam was involved between 1999 and 2009, was also founded by diasporic Cambodians and people from other countries. The CKS is a hybrid model combining both national and international collaboration that has multiple roles and objectives: it is an international higher education institute, a Cambodian NGO, an American Overseas Research Centre, and part of a local capacity building programme. Activities organized by the center are aimed at supporting Cambodian higher education in the humanities, arts, and social sciences and to help rebuild Cambodia's community of scholars, artists, and creative leaders.

Nevertheless, this grassroots movement in which people are making a difference also has its challenges. Since they receive no Cambodian or international funding and no institutional support in Cambodia or internationally (such as UNESCO), they are overly dependent on private international philanthropy and its attendant politics. They also see a lack of activity in international higher education and cultural institutions in the areas of the humanities and the arts.