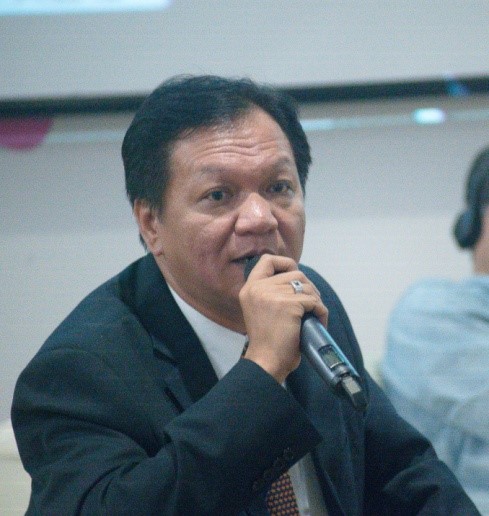 Tom Lii, the moderator of this session, is dedicated to promoting eco-sustainability and eco-friendly agriculture, preserving local cultures, and raising social awareness about humanitarianism. He began the Q & A session by introducing himself and talking about his experience working and living in Southeast Asia for sixteen years. First a businessman, he later set up the NGO "Better World by Design” with some friends. This organization uses local culture and design to help local artists enter the international fashion market, where they can earn more. He concluded his introduction by saying that he hopes to be a bridge between Southeast Asia and Taiwan, so that Taiwanese people can see and appreciate the beauty and value of Southeast Asian cultures.

An audience member directed his first question to the speakers from Laos and Vietnam, wishing to know whether the help of fair-trade projects and NGO/NPOs actually enabled disadvantaged and minority groups to achieve economic independence. His second question was directed to the speakers from Indonesia and Cambodia, who had mentioned that over-development has forced the poor to leave their homes, asking what challenges the poor face when they become more disadvantaged and when they have to make a new home and how we can help them.

Tran Tuyet Lan addressed the first question by explaining that Craft Link is an official member of Fair Trade, which helps at the grassroots level, so they train local artisans to follow the ten Fair Trade guidelines. The organization provides training for all groups, but the main problem they face is communication issues, as it usually takes a few months before staff can interact directly with locals. But when the project is over, the women continue to collaborate with Craft Link, so many groups have been working with the organization for up to nineteen years, even if they already have access to more markets and world-wide networks.

Degrees of self-sufficiency vary from group to group: it's up to them to decide how much more they wish to work on handicrafts; Craft Link just offers assistance to help them earn extra income. By doing so, women can also develop and revive traditional handicraft culture and traditional patterns. Now, more than 50 groups are earning an income from handicrafts, and more than 40% of the other groups are making gradual progress.

Carol Cassidy said that the employees at her small company have been with them for 25 years and are now professional weavers. Weavers in Laos enjoy a good salary, a pension plan, and a health scheme that the company introduced to Laos. The business in Laos generates enough surplus to support the charity in Cambodia. The Cambodian project is not sustainable as yet, but 2015 will mark the first year she has not transferred funds to Cambodia.

The idea is to create a sustainable cycle: design, production, and sales are all done in Cambodia, managed by locals who are taking responsibility for their own future. This is the model she is developing in Cambodia. Laos is a different story because they have the same staff who have moved from agriculture areas to the capital, Vientiane. They have good salaries and houses, their children go to school, and they have better medical benefits. The way their lives have been transformed over the past 25 years is clear to see.

Lii followed up by asking how the organizations and local artists set prices and profit margins. "I don't think you become a weaver to make money,” was Cassidy's initial answer. "Just the fact that we are able to sustain ourselves is satisfying to me.” She went on to explain that, since the entire operation is carried out in Laos, costs are relatively low. However, she also pointed out that her company does not exist for the tourist market; rather, they focus on revisiting tradition. The projects they take on are not necessarily driven by financial motives.

Lan offered another answer. Craft Link has three main marketing channels: retail, wholesale, and export. Export generates the most income for artisans and now makes up about 80% of their profits. The profits provide enough funding to support all the projects provided to ethnic minority groups in Vietnam.

Lii closed the session by reminding the audience that all training projects must improve the lives of local artists and eventually help them achieve financial independence.