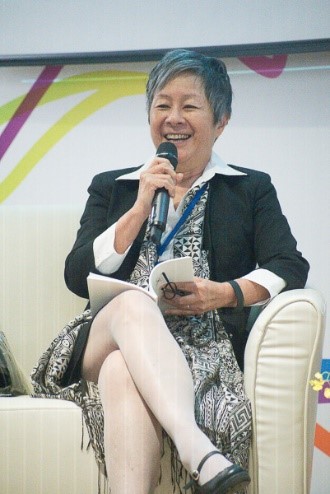 Nobuo Takamori, one of the moderators, opened by saying that artists in Taiwan often think that the relationship between the art worlds of Taiwan and Southeast Asia is something new, but in his view it has existed for a long time. For example, in the 1950s, a lot of exhibitions of Southeast Asian artifacts touring the US had the participation of Taiwanese artists, and there was a strong link between Taiwan and the Philippines until the 1970s. In fact, before Singapore severed diplomatic ties with Taiwan in 1992, the two countries had strong relations in the art field, which is why many sculptors, such as Zhu Ming and Yuyu Yang, think of Singapore as one of the most important international platforms on which to present their works.

Takamori said he often wonders what Taiwan would be like today if European colonizers had not been expelled. If Spain had taken control of Taiwan, that would make Taiwan part of the Philippines; if the Dutch were still here, maybe Taiwan today would be part of Indonesia, or vice versa. If France successfully occupied Taiwan in the 19th century, Taiwan perhaps would become part of Vietnam. According to this way of thinking, Taiwan is already part of Southeast Asia, so the question now is not whether it is Southeast Asian, but how to revive the Taiwanese people's awareness of being Southeast Asian.

Margaret Shiu, the other moderator, stated that Taiwan has been informally engaged with Southeast Asia through art for many years now. She thinks that art should have no borders, and that culture in particular should not be beholden to politics. Today's speakers were all trying to use their role as artists to help their societies to heal, especially after trauma, war and destruction. This conference was timely, she said, because there should be a way to discuss cultural policy with the government and to attract government support. More importantly, this way must go beyond politics, history, and trauma. The art world has found a way to reconnect Asia, especially Southeast Asia and South Asia, and people in these areas have to explore how they can share knowledge, how they can be a social enterprise, and how they can connect with international NGOs and be local and global at the same time.

She hopes to see more possibilities of "the Three Ps”, where the Public sector engages with the Private sector for the good of the People. More importantly, she strongly believes that society will change through art in culture, and that it can change people's perspectives. Creative collaboration, which is what everyone attending the conference is doing, will be the catalyst for change.

Addressing a question from a student in the audience about how college students can be more in touch with the art scene in the rest of the world, Shiu suggested that, apart from programs run by the Ministry of Culture, students could also apply for grants from the private sector and foreign NGOs such as the Arts Network Asia of Singapore. Nikko Zapata suggested the Ministry of Culture put the video of the conference online, and the student who asked the question could post the information and so help influence the younger generation.

Responding to a question about how government support has been received by artists in Myanmar, Ilaria Benini said there is no government support at all in that country and there is no awareness of contemporary art or literature at the moment. Censorship of writing and literature was only lifted in 2013, so people are just starting to express themselves, and the government is not interested in supporting them. A big challenge in Myanmar today, she said, is that years ago the central government decided to relocate the capital city and the administrative center to a very remote location. Most artists working in associations are not registered with the government because it is extremely difficult to get to the seat of government, but if they are not registered, they cannot apply for official grants from Taiwan. Thus, she hopes the Ministry of Culture will look for alternative approaches to supporting artists in Myanmar.

Shiu suggested a way to facilitate the funding process: artists in Southeast Asia could find a partner here in Taiwan and apply for funding through their partner.

Tay Tong said another way to work around obstacles like visas and registration is to use intermediaries, such as ANA, that could act as a kind of facilitator and enabler. At the same time, he added, it is also crucial for the art community to be empowered, to take action, to make change, and to believe in collaboration. In Singapore, for example, work permits were required for international artists who want to perform in the country. But after local artists and cultural workers campaigned and lobbied the Home Affairs and Immigration Department, international artists performing in Singapore no longer have to apply for work permits.

Phloeun Prim also shared his perspective on Cambodia, saying the situation in Taiwan in some respects resembles what is happening in Cambodia, where civil society supports the revival of the country in many areas, and the youth are starting to speak out. Young people understand the country's background and what is going on in the wider world, and they are connecting through Facebook and forming a movement so strong that no one, and certainly not the government, can stop it.

Shiu concluded by saying that the whole situation is a big mess because people mess things up, so it is time to use art to surmount these obstacles.