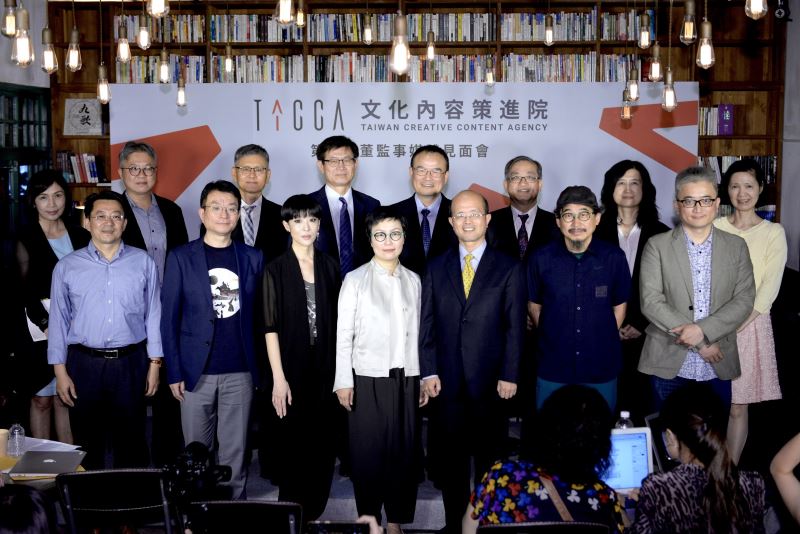 The first board of directors and supervisors of the Taiwan Creative Content Agency (TCCA) met for the first time on July 17. In a press conference after the inaugural meeting, the agency pointed out that rejuvenating Taiwan's creative sector is its primary goal.

To achieve this goal, the agency will come up with a three-stage implementation program divided by one-year, three-year, and five-year projects. The TCCA has eight major tasks to push forward — inspiring the development of creative content and the cultural applications of technology, completing a financial network for cultural content, incubating talent and startups, supervising the production process of cultural content, developing marketing channels at home and overseas, building a global presence for Taiwan's original brands, and providing assistance in intellectual property issues and industrial trend studies.

The Organizational Act of the Taiwan Creative Content Agency (文化內容策進院設置條例) officially took effect on Feb. 12 after clearing the legislative floor late last year. The Executive Yuan approved on May 28 the list of the TCCA's board of directors and supervisors and the appointment of former Deputy Minister of Culture Celest Hsiao-ching Ting (丁曉菁) as the TCCA's first chairperson.

Ting pointed out that the board’s directors from the private sector will organize a panel to nominate a candidate for the position of TCCA president based on the scope of work scheduled for the current stage. As acting president, the chairperson will then submit the nomination to the board for review and approval within three months.

According to Article 8 of the TCCA's organizational act, the number of directors chosen from governmental agencies shall account for no less than 50% of the board's total, putting the number of the government-nominated members at eight.

These government-nominated directors are expected to give a big boost to the TCCA's work in setting up an interdisciplinary platform for Taiwan's cultural content industry with the resources that their respective agencies can contribute.

The TCCA's directors from the private sector were chosen based on the consideration that the agency's primary tasks are inspiring the development of cultural content in the form of audiovisual production, pop music, traditional and digital publishing, games, fashion, and design; supporting the arts and the application of innovative technologies to culture; and building a financial network for the cultural and creative sector.

The TCCA's board of supervisors include Lee Chiu-yue (李秋月), head of the Ministry of Culture's Department of Accounting; Mao Hao-chi (毛浩吉), head of Copyright Division of the Intellectual Property Office at the Ministry of Economic Affairs; and Liao Fu-te (廖福特), a research fellow of Academia Sinica's Institutum Iurisprudentiae.

Together, they will help the TCCA operate as an intermediator that pushes for cross-sector cooperation with their respective backgrounds that represent a wide range of industrial expertise related to cultural and creative content.