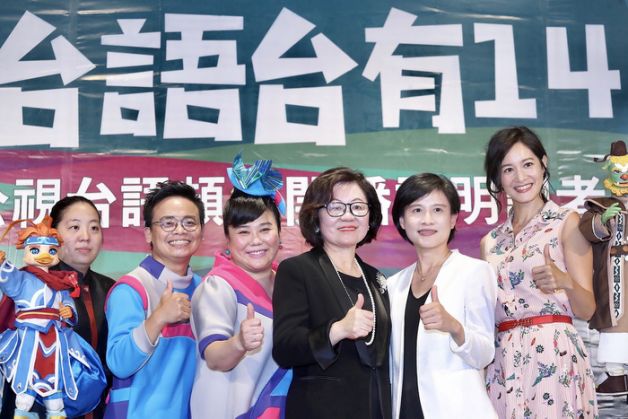 The TV station's preparatory office for the Taiwanese-language channel held a press conference on June 25 at Nanmen Park of the National Taiwan Museum, saying that its programs will not only be broadcasted on channel 14 on all cable TV systems across Taiwan but also on Chunghwa Telecom's multimedia-on-demand (MOD) service.

PTS Chairperson Tchen pointed out that as the mother language for many Taiwanese citizens, Taiwanese should be preserved as part of the nation's cultural heritage by becoming adeptly used in daily life. She stressed that only through everyday usage can this language see a new future, especially at a time when the world is changing faster than ever before.

Minister Cheng pointed out that Taiwan has not yet had a TV channel dedicated to broadcasting Taiwanese-language programs, although it already has a Hakka TV station set up 16 years ago and a TV station for indigenous languages that opened 14 years ago.

She noted that after years of diligent efforts from the government and many civilian groups, the National Languages Development Act (國家語言發展法) cleared the legislative floor last year, providing the legal grounds for setting up a Taiwanese-language TV station as the Ministry moves forward with Taiwan’s equal cultural accessibility campaign and revitalization of native languages.

Minister Cheng stressed that the Taiwanese-language channel is intended not just for people who speak it as mother tongue but also for the general public in Taiwan. She invited all of Taiwan's residents to use and appreciate this language, saying that the Ministry of Culture will throw its weight behind the new channel by inspiring the private sector to produce more quality Taiwanese-language programs through the PTS and the Chinese Television System.

PTS will hold a ceremony on July 6 at the Keelung Maritime Plaza to celebrate the opening of this channel, with the coastal plaza chosen for underscoring the oceanic undertones of the Taiwanese spirit.

The July 6 ceremony will provide prominent performances, including traditional song chanting by treasured folk singers, Taiwanese pop songs, and new music by younger generations. These performances are devised to echo the history and the spirit of inheritance imbued in the Taiwanese language.