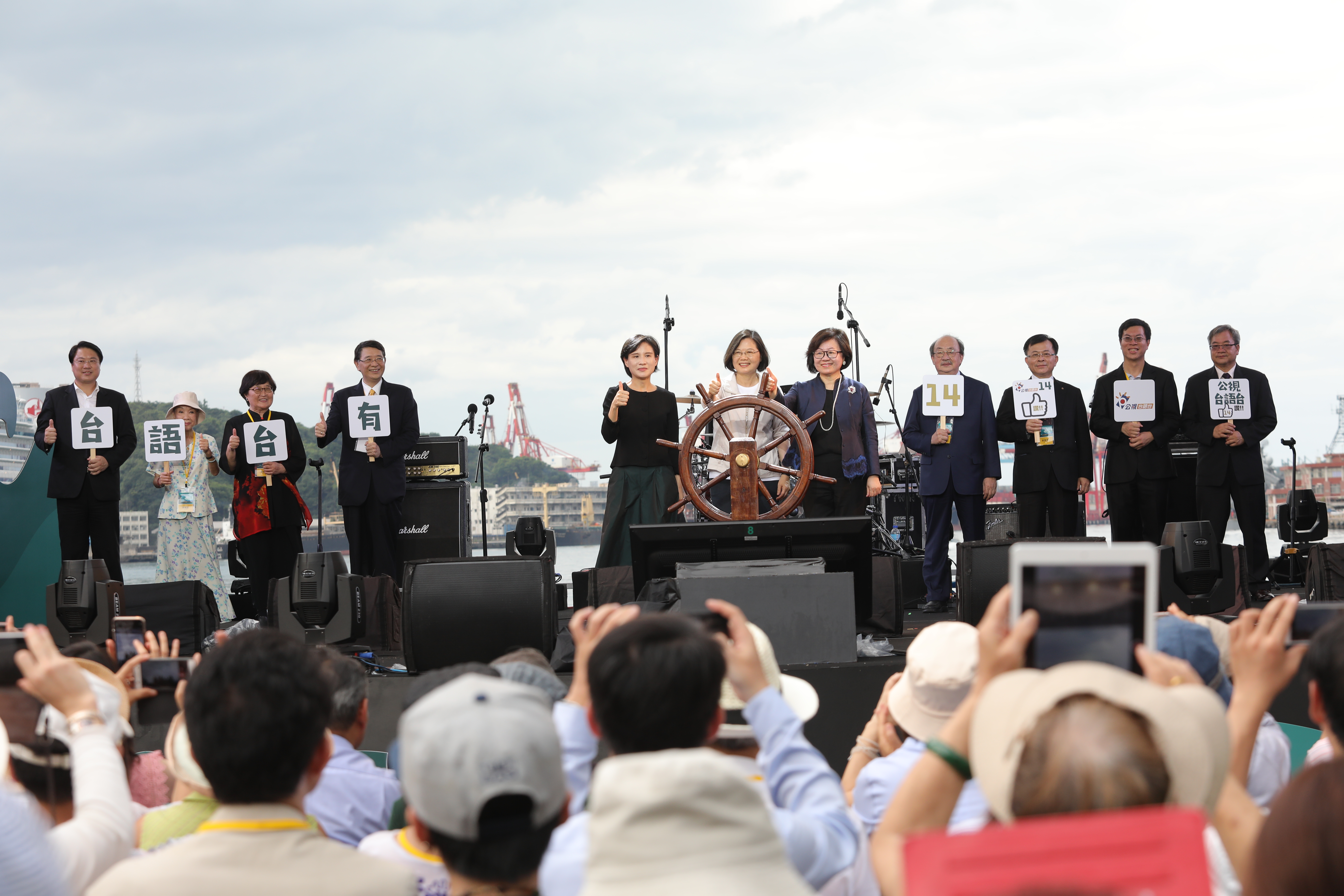 The Public Television Service (PTS) held a ceremony on July 6 at the coastal Keelung Maritime Plaza to announce the commencement of Taiwan's first TV channel dedicated to Taiwanese-language content — Channel 14.

The opening ceremony was attended by President Tsai Ing-wen, Minister of Culture Cheng Li-chiun, and PTS Chairperson Tchen Yu-chiou (陳郁秀), who jointly inaugurated the channel. The ceremony was accompanied by the blaring of ship horns, which represented the start of the channel's journey like a ship setting sail and carrying Taiwanese culture to the world.

The ceremony was curated by vocalist Sam Yang (楊大正) of the Taiwanese rock band Fire EX (滅火器), who chose the Taiwanese phrase "Tâi Gí Khai Káng, Tsò Tin Tshut Phâng (台語開港、做陣出帆)," or "Let's set sail aboard the Taiwanese channel," as the theme of the ceremony. The concept and music selection, along with the ship-shaped stage, were intended to convey the oceanic undertones of the Taiwanese spirit.

Taiwanese folk singers Chen Ming-chang (陳明章) and Wu Guo-zhen (吳國禎) were among the artists invited to perform at the ceremony to underscore the ongoing evolution of the Taiwanese lingua from a government-banned language decades ago to an important element of popular songs in today's Taiwan.

Traditional chant singer Yang Xiu-qing (楊秀卿) also presented a new performance specially created for this ceremony to remind audience members that they should never forget their Taiwanese roots. Taiwanese poet Wu Sheng (吳晟) and his son Wu Zu-lin (吳志寧) were among the cultural dignitaries who attended the ceremony.

Minister Cheng pointed out that she has made launching a dedicated Taiwanese channel on PTS her wish and duty since she took office three years ago. With Channel 14 live since July 1, Taiwan now has three TV channels dedicated to national languages — Hakka TV, Taiwan Indigenous TV, and the PTS Taiwanese channel.

The Minister stressed that the establishment of the Taiwanese-language channel is a crucial step for the nation's equal cultural accessibility campaign. As the embodiment of Taiwan's diversity, inclusiveness, and openness, PTS is becoming an ever-important conduit for promoting the free and democratic lifestyle of the Taiwanese people to the world, she stated.

Noting that the Ministry of Culture will continue to offer more resources and support to PTS, Minister Cheng hoped that everyone in Taiwan can speak their mother language with pride and gain a deeper appreciation for the beauty of Taiwan's linguistic diversity.

President Tsai delivered her full remarks in Taiwanese, saying that this channel represents major progress in the development of Taiwan's TV broadcasting industry and a watershed moment for Taiwanese culture.

Noting that Taiwanese should be treasured as a part of life in Taiwan and as a language that is spoken by all age groups, President Tsai also asked the ceremony host about the Taiwanese words for "diplomatic allies" and "bilateral talks" in preparation for her upcoming state visit to Haiti, St. Kitts and Nevis, St. Vincent and the Grenadines, and St. Lucia.

The PTS Taiwanese channel will be carried by 90% of all cable TV systems across Taiwan and become available on Chunghwa Telecom's multimedia-on-demand (MOD) service starting July 6.