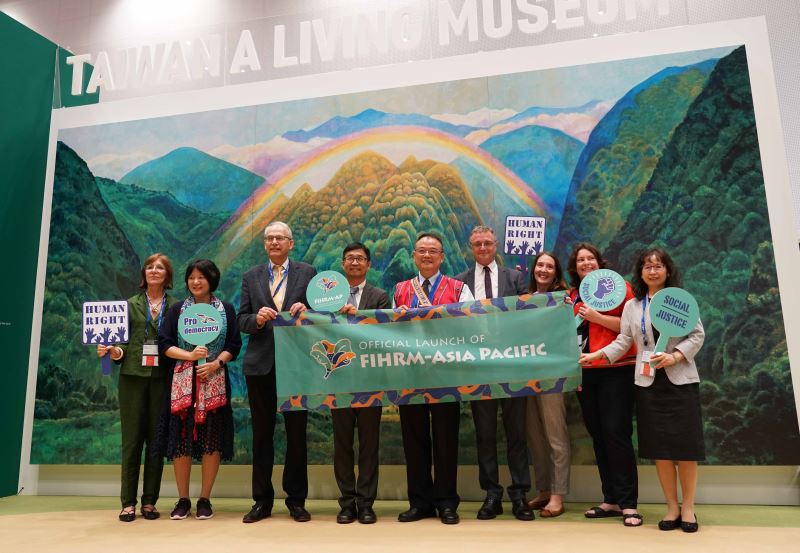 The news was formally announced on Sept. 3 at the 2019 General Conference of the International Council of Museums (ICOM) in Kyoto, Japan. David Fleming, founding president of FIHRM, noted that Taiwan was considered the unequivocal location to establish the federation's Asia-Pacific branch, given its diversity of cultures and recent global achievements in advancing human rights.

"I think what happens in Taiwan in regards to human rights is without parallel in the world. Its very, very wonderful. I can't think of anywhere that is a better place to launch FIHRM-AP than in Taiwan," he said. Operating out of Taiwan's National Human Rights Museum should help FIHRM-AP promote greater awareness of these inalienable rights and facilitate dialogue on related issues unique to the Asia-Pacific, Fleming added.

FIHRM Asia-Pacific has been launched! We are delighted that National Taiwan Human Rights Museum will be leading this new network to foster active dialogue on human rights in the Asia Pacific region. Very excited to be working together! #ICOMKyoto2019 pic.twitter.com/TDU7pKss7z

The National Human Rights Museum was officially inaugurated in 2018 after unveiling its Green Island White Terror Memorial Park and Jing-Mei White Terror Memorial Park respectively on May 17 and 18 last year, marking Taiwan's commemoration of historical trauma at the state level and the transformation of negative heritage sites from that authoritarian era into educational platforms for human rights.

The National Human Rights Museum Organization Act passed its third reading in December 2017, with the museum's opening ceremony held on May 18 to commemorate International Museum Day. It now celebrates its annual anniversary on May 17, the day when it was established in 2018 and the date when the first large-scale shipments of political victims were escorted to Green Island for "thought reformation" education during Taiwan's martial-law era known as White Terror.

It is also the first museum in Asia to be established in locations that previously served as parts of the machinery of authoritarian rule.

"It is a recognition of the achievements of Taiwan in the human rights field," stated Deputy Minister of Culture Hsiao Tsung-huang. "We will be sure to work together with all these forces around the Asia Pacific in order to ensure that all museums will be able to better realize the universal values of justice and fairness."

Citing the grave human rights abuses such as war, genocide, and authoritarianism in Asian-Pacific history, Chen Chun-hong, director of the National Human Rights Museum, asked: "How can the sins of the past be transformed into hope for the future?"

Director Chen also called attention to the magnitude and mounting categories of ongoing global human rights crises — including the climate crisis, the refugee crisis, and the plight of migrant workers — and extended an invite to the general public to join the cause and "build a world that is more respectful of human rights."