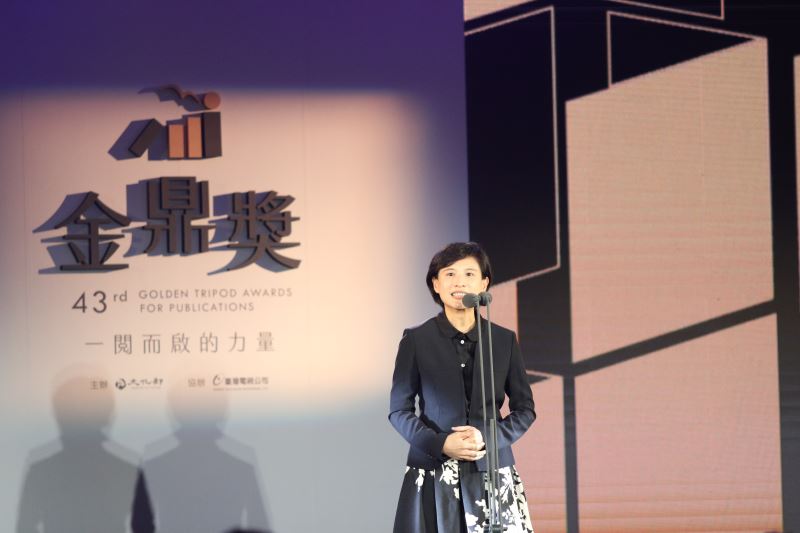 The 43rd Golden Tripod Awards ceremony, which honors the best in all aspects of Taiwan's publishing industry, was hosted by the Ministry of Culture at the Taipei New Horizon Building on Sept. 12.

This year, more than 1,200 publications — grouped into the four major categories of magazines, books, government publications, and digital publications — competed for the awards. The entries were reviewed by experts and scholars for nearly two months. A total of 29 works were awarded and 45 others were recommended as excellent publications.

In his speech, Premier Su Tseng-chang said that in free countries, publications are not suppressed. Progressive governments respect publishing, encourage creative output, and use state powers to safeguard freedom of the press.

This was in contrast to Taiwan's martial-ruled past, when people used words and guns to confront the government, he said. The Premier then thanked the publishing industry’s veteran professionals for their release and applications of creative works and publications, which allowed Taiwan to achieve the freedom, democracy, and openness it enjoys today.

The Golden Tripod Special Contribution Award was bestowed to writer-translator Arlene Hsing Chia-hui (幸佳慧), who was unable to attend the Sept. 12 ceremony. Premier Su, who handed over the physical accolade to Hsing on Aug. 26 at the Executive Yuan, also praised Hsing for her commitment to children's picture books and storybooks, noting how her passion and formidable talents have brought children the courage to pursue a better life.

In her speech, Minister of Culture Cheng Li-chiun promised that the Ministry of Culture will intensify the promotion of five major tasks pertaining to reading and publishing:

"When there are people in the world who are politically oppressed because of opening bookstores or sharing their creations, we will work harder to protect Taiwan's free and pluralistic publishing environment," stated the Minister. "We are confident that Taiwan's open and diversified publishing culture can serve as an important cultural beacon for Asia."