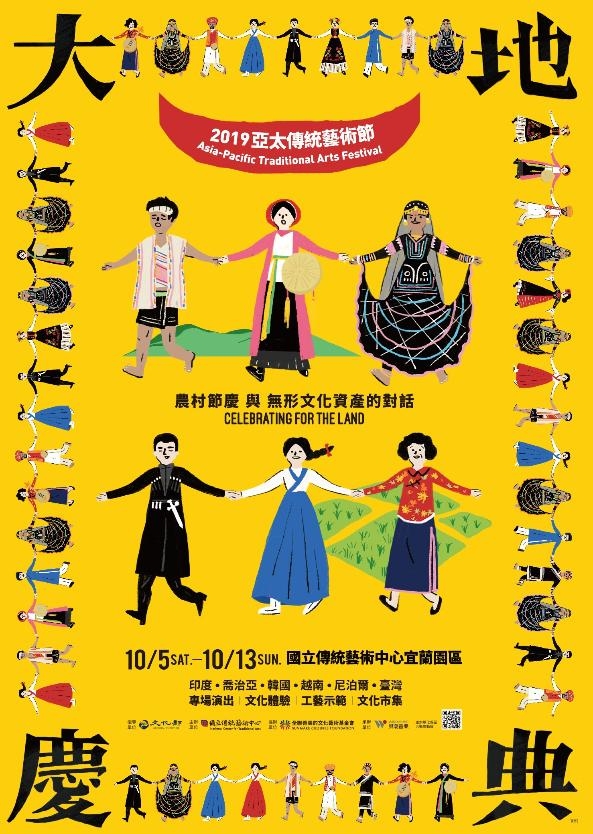 Under the theme of "Celebrating for the Land: Dialogue between Countryside Festivals and Intangible Cultural Heritage," the 2019 Asia-Pacific Traditional Arts Festival has invited overseas groups that perform tradition folk music and dance recognized by the UNESCO Representative List of the Intangible Cultural Heritage of Humanity, as well as prestigious traditional artisans from four different Asian countries. Alongside Taiwanese performance groups, this joint appearance of Asia Pacific’s stunning cultural treasures will take place in Yilan County from Oct. 5 to 13.

The four invited groups shall display their vocal and instrumental skills to convey the beauty of intangible cultural heritage. Mystic Pathways from India will be presenting Kalbelia folk singing and dancing, which are traditionally performed during celebrations as an integral part of the nomadic Kalbelia culture from Rajasthan. Some of their songs incorporate traditional Bulgarian chanting, for Bulgarian musicians believed their forefathers were gypsies of Rajasthan, and wanted to re-establish that bond in the form of harmonized music.

Iberi Choir from Georgia will showcase Georgian polyphonic singing with traditional instruments, bringing a distinctive approach to melody that reflects the mountainous and coastal Georgian life. Additionally, Iberi Choir will perform several pieces with the Sound to Heaven Lileh (南投縣信義鄉布農文化協會) troupe of the Bunun tribe, whose members have been recognized as preservers of Taiwan's indigenous heritage by the Ministry of Culture, giving festival-goers the opportunity to experience the harmonious combination of two distinct forms of vocal art.

Quan ho songs are traditionally sang during spring and fall at festivals and gatherings, incorporating songs with lyrics from poems and folk verses to express feelings without musical accompaniment. The Quan họ performers will also team up with Manjhou Folk Songs Association (屏東縣滿州鄉民謠協進會) performers, who have been recognized as preservers of Manjhou folk song heritage by the Ministry of Culture, to sing together for audiences to enjoy.

To further enhance this meaningful experience for attendees, traditional artisans from four Asian countries have been invited to showcase their unique art forms: Buddhist deity statuary from Nepal, cloisonné enamel work from Georgia, raden lacquer work from South Korea, and rattan weaving from Vietnam. The visiting crafts makers will exhibit their skills, exchange ideas with local artists, and hold DIY workshops for attendees. Another highlight of the festival will be the exchanges among visiting artists and the residency artists of the Yilan Park operated by the National Center for Traditional Arts (NCFTA).

Located on the Lanyang Plain, the NCFTA Yilan Park is an enchanting spot that explores the essence of Taiwanese traditional arts and folk culture in a beautiful and natural environment. Everyone is invited to join this earthly, joyous celebration!

The 2019 Asia-Pacific Traditional Arts Festival runs through Oct. 13. The full bilingual program is available at https://festival.ncfta.gov.tw/2019aptaf/.