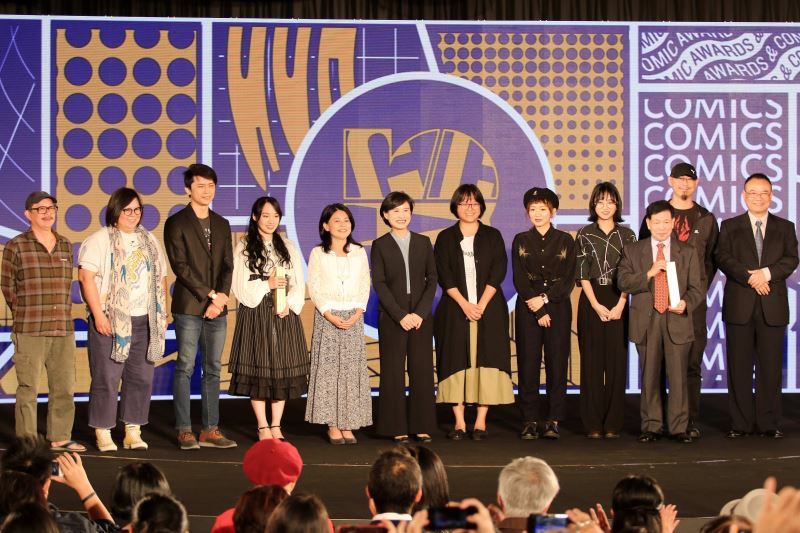 The 10th Golden Comic Awards ceremony organized by the Ministry of Culture on Sept. 25 was a major event for the cultural and creative industries in Taiwan. Of the 102 submissions received this year, only 24 of the most outstanding entries were ultimately included in the running for the nine award categories.

Comic of the Year went to "Pink Ribbon (粉紅緞帶)" by artist Monday Recover (星期一回收日), with the judges praising its ornate and multifaceted style as proof of how Taiwanese comics are finding their own rhythm. This year's winning publication was an innovative, emotional experience that broke through traditional boundaries and conceptions of comics for teenage girls, leaving a lasting impression and showcasing the potential of the emerging new generation of Taiwanese comic artists.

The Special Contribution Award went to comic artist Yu Long-hui (游龍輝), one of the two iconic greats of the wuxia genre in Taiwan, the other being 2017 Special Contribution Award recipient Hsu Mao-sung (許貿淞). At the height of his influence in the 1960s, Yu's works played a pivotal role in the development of Taiwanese comics, having been adapted for both big and small screens.

Upon accepting his award, Yu remarked that some 50 years ago comics were derided as "poison" for children, but today, the government is an engaged advocate for this creative medium and has even established a national award to recognize these artists. He expressed his gratitude to the Ministry of Culture for such efforts, adding that he has seen a number of outstanding works at the Taiwan Comic Base, and that he is confident that with the ongoing support of the Ministry, there will be even more Taiwanese comics that are on par as or even better than those produced elsewhere.

The ceremony also saw singer, actress, and Golden Horse and Golden Bell winner Nana Lee (李千那) make an appearance to express her appreciation for Taiwanese comics. In coordination with the Taiwan Creative Content Agency, virtual YouTuber LanCee (蘭希) also made her first "live" appearance, performing the theme song for the Golden Comic Awards and interacting with the host and audience members in a display of successful cooperation between the manga, technology, and music sectors.

"Scrolls of a Northern City (北城百畫帖)" protagonist Minghu (明湖) made a virtual appearance as well by introducing nomination videos and coordinating with presenters to bestow the awards. Marking the first full decade of the Golden Comic Awards, the ceremony was a fantastic cross-sector milestone for Taiwanese comics.

The 10th Golden Comic Awards ceremony will be broadcast on channel Taiwan Television (TTV) at 5pm on Saturday, Oct. 12. The full list of award winners is available here.