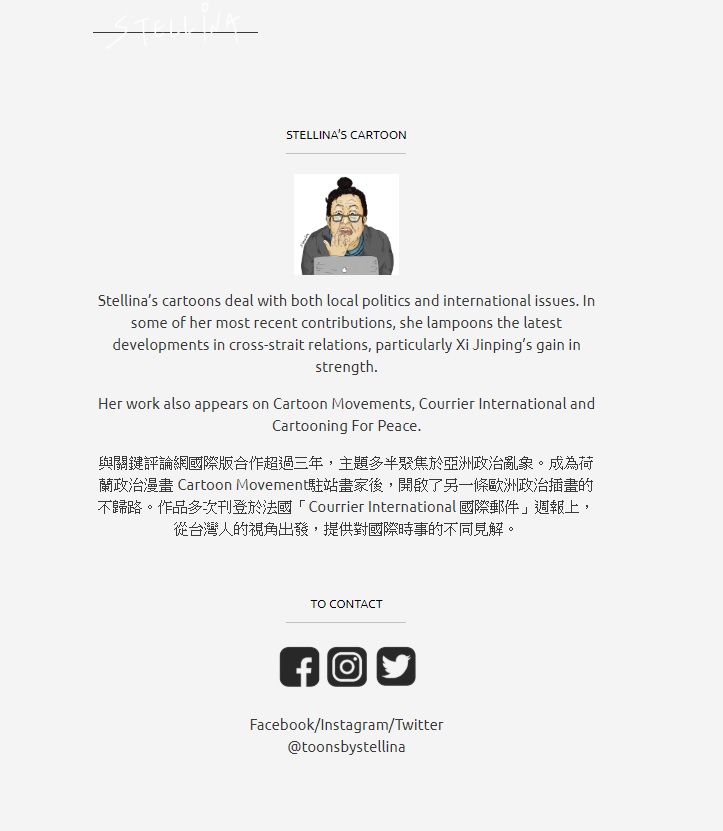 Taiwanese cartoonist Stellina Chen (陳筱涵) has been chosen to serve residency at bd BOUM Maison de la BD (House of the Comic Strip). She will reside in Blois city in the Centre-Val de Loire region of central France for three months beginning this December. The residency program is part of a cooperative pact between the Ministry of Culture and bd BOUM Maison de la BD, the organizer of the famed bd BOUM Comics Festival.

Chen previously studied international relations in Paris before working with The News Lens International as an illustrator and with Taiwan's Ministry of Foreign Affairs as a new media editor. Chen is also an official cartoonist for Cartoon Movement, a Dutch-founded global online platform for political cartoons and graphic journalism. Using her unique Taiwanese perspective to provide different insights on world events, her works have been published in French weekly Courrier International as well.

Chen's residency project "En quête de raciness," meaning "in search of roots," will use her visual language to record the story of her grandparents and create a tangible legacy to honor Taiwan's diverse residents and their history. The Ministry shall subsidize round-trip flight tickets and transportation expenses, while bd BOUM Maison de la BD will provide housing and studio space.

The 36th bd BOUM Comic Festival will be held from Nov. 22 through 24, with over 200 international cartoonists and 70 publishing houses expected to attend. Taiwan will be the first and only Asian country to participate in this graphic affair.