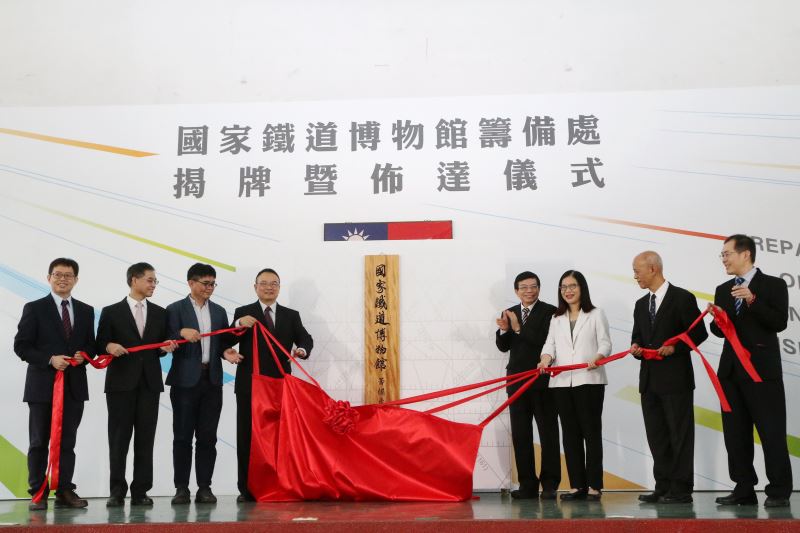 The National Railway Museum Preparatory Office held a ceremony on Oct. 2 celebrating both its grand opening and the appointment of its first director, Dr. Hung Chih-wen (洪致文). The historic moment was accompanied by the unveiling of a stately plaque for the preparatory office crafted by renowned calligrapher Tong Yang-tze (董陽孜).

The Taipei Railway Workshop, a registered national historic site, is being transformed into the National Railway Museum. The associated preparatory office was formally established on Aug. 13 this year as a show of the government's dedication to the preservation of Taiwan's railway heritage and as a response to calls from community groups for this substantial piece of cultural heritage to be converted into a public museum and park.

The Ministry of Culture believes that the planning in the preparation stage is critical for the birth of a successful museum. As such, a dedicated office has been established alongside the commencement of physical restoration work, in hopes that such an organization will facilitate the involvement of specialists from related fields in the process of creating the museum.

In addition, the Ministry of Culture is coordinating with the Ministry of Transportation and Communications. The two have signed memoranda of understanding in 2017 and 2018, respectively focused on the facilities and operational aspects of the railway museum, as well as on joint efforts toward vehicle maintenance and preparatory work. Thus in his keynote speech, Deputy Minister of Culture Hsiao Tsung-huang made a point of thanking the Executive Yuan, the Ministry of Transportation and Communications, and the railway community for their support and hard work in this process.

The deputy minister also shared Minister of Culture Cheng Li-chiun's three hopes for the National Railway Museum. The first hope is for it become a "living museum" by hosting dynamic exhibitions of valuable vehicles and sustainable restoration methods; the second is for it to become a public-oriented museum that tells stories by building on research to bring Taiwan's railway history, transportation history, and collective memories to life; the third is for the National Railway Museum to bring a modern perspective to shared nostalgia by reflecting on the past with the spirit of a modern museum.

Preparatory office director Dr. Hung stated that the museum's core values will be focused around the presentation and preservation of Taiwan's railway heritage, vehicles, and technologies, and that the museum aims to become a model of locomotive preservation by collecting important resources on Taiwan's railway culture, building on the site's past, and engaging in dialogue with the world. With a comprehensive vision of a National Railway Museum that links together a variety of assets, the office aims to position the museum as an international destination that is "a uniquely Taiwanese forerunner from Asia that captures the attention of the world."

After the completion of the ceremony, the special guests joined long-time railway fans, volunteers, and members of the Railway Cultural Society of Taiwan in writing down their best wishes and blessings for the future opening of the museum. These were then placed in a time capsule to be opened in 2026 when the venue fully opens to the public, so that visitors can reflect on the wishes and hopes of those present today.

"Lost and Found: Re-Envisioning the Machine Age" was held in Taipei earlier this year to invite visitors to brainstorm on new applications for the Taipei Railway Workshop's shuttered facilities.