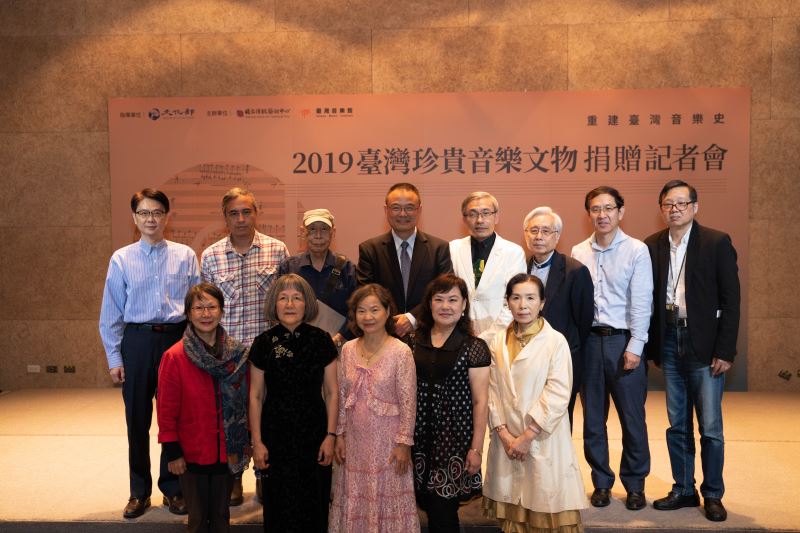 The Taiwan Music Institute, an affiliated organization of the National Center for Traditional Arts (NCFTA), hosted a press conference on Oct. 24 to showcase the 2019 donations of Taiwan's precious musical works and relics, including compositions, plays, and publications relating to music education, theater production, and traditional art research.

Deputy Minister Hsiao expressed his sincere gratitude to the donors for their contributions. "Reconstruction of Taiwan's Art History" is one of the Ministry of Culture's latest flagship projects and the documentation of Taiwanese music history is an essential part, in which the Taiwan Music Institute has comprehensively searched and accumulated important historical items for preservation. Hsiao stressed that the manuscripts and cultural relics donated to the Taiwan Music Institute will be properly preserved, digitized, and promoted.

Furthermore, Hsiao explained that Minister of Culture Cheng Li-chiun has been a staunch advocate for upgrading the status of the Taiwan Music Institute from an affiliated agency to an independent national-level institution, which would help expand the scope of the institute’s collection and preservation of Taiwanese music.

NCFTA Director Chen Chi-ming (陳濟民) also shared the many recent achievements of the Taiwan Music Institute, from successively collecting donations of more than 12,000 valuable manuscripts and relics, to completing the digitalization of works by many distinguished Taiwanese composers, such as Kuo Chih-yuan (郭芝苑), Chang Hao (張昊), Hsu Sung-jung (徐松榮), and Dai Hong-xuan (戴洪軒).

In its efforts to preserve the nation's precious music heritage, the Taiwan Music Institute is also an active member of international organizations like Répertoire International de Littérature Musicale (RISM) and International Association of Music Libraries, Archives and Documentation Centers (IAML). Such transnational participation and exchanges have facilitated the cataloging of works by prominent Taiwanese composers and enhanced the visibility of Taiwan's music on the international stage.

To emphasize the importance of preserving, collecting, and applying historic materials, UNESCO has designated Oct. 27 of each year as World Day for Audiovisual Heritage. In response to this movement, the institute will hold a series of forums on Oct. 25 featuring speakers including RILM Chair Mackenzie and RILM's Mandarin publications editor Yun Fan (樊昀). Additionally, eleven local music establishments will be participating in the launch announcement of the Taiwan Music Organizations' Strategic Alliance (TMOSA, 臺灣音樂策略聯盟) after the forums. The purpose of the alliance is to gather music resources from across the nation and share Taiwan's rich and diverse culture with the world.

On behalf of this year's donors, veteran composer Lai De-ho (賴德和) spoke about the importance of the Taiwan Music Institute's plans for launching a digital platform with copyright details and options for paid downloads, which would help Taiwanese music become known and utilized on a global scale. There is immense interest in performing Taiwanese music, but access is currently limited due to copyright purchasing roadblocks that would be resolved by such a digital platform, he added.

Even though it would be hard to part with their collections, he encouraged Taiwanese composers and musicians to donate their valuable manuscripts and relics to the Taiwan Music Institute to assist with the reconstruction of Taiwan's music history. Furthermore, donors should feel confident to bequeath their works because the Taiwan Music Institute's preservation techniques are on par with international standards and their masterpieces will also be digitized and promoted, said Lai.