Meet the winners of the 2019 Taiwan Literature Award 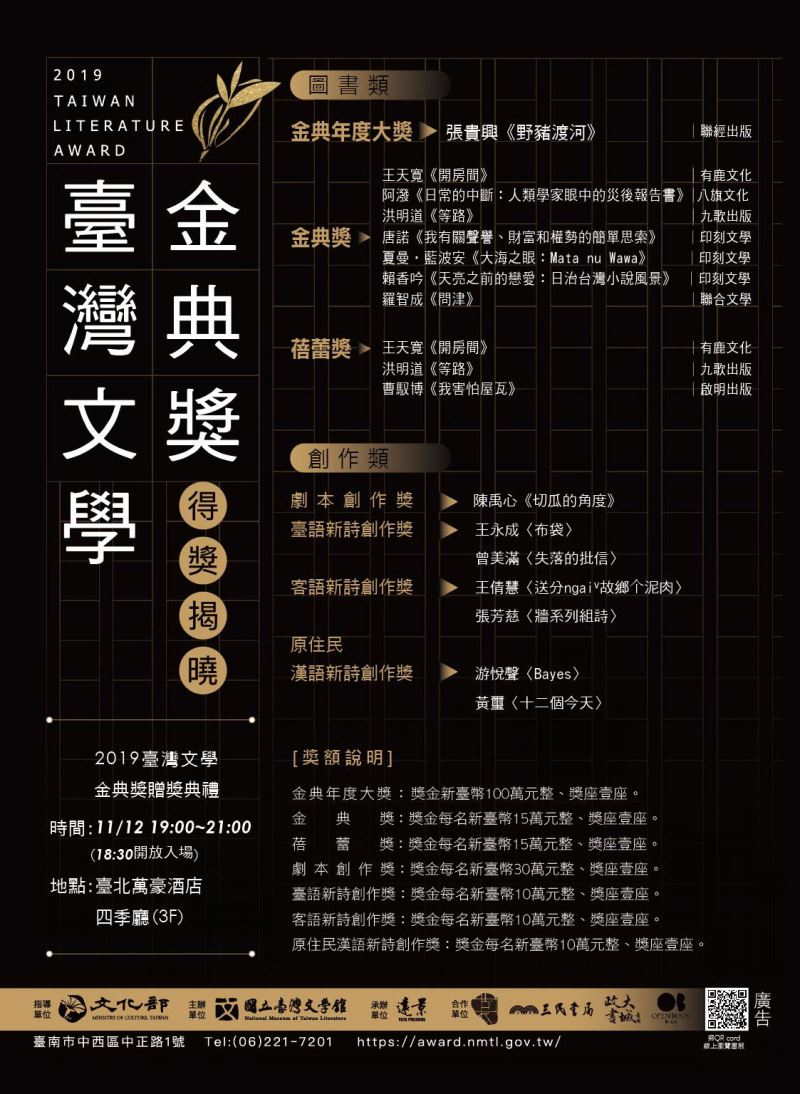 The winners of the 2019 Taiwan Literature Award were named on Oct. 25, with the much-awaited Book of the Year award given to Chang Kuei-hsing's (張貴興) "Wild Boars Cross the River (野豬渡河)," selected from 147 outstanding candidates for the award and NT$1 million in prize money.

Hong and Wang were also two of the three Best New Talent recipients, along with Yubo Cao (曹馭博) for "I'm Afraid of Roof Tiles (我害怕屋瓦)." Each of the three will receive a trophy and NT$150,000 in prize money.

The jury remarked that the Book of the Year winner, "Wild Boars Cross the River," presented the Sarawak village of Krokop under Japanese rule period through magnificent prose, engagingly evoking the humanistic drive to survive in the tropical rainforest, the brutality of the occupiers, the resistance of the locals, the tyranny of nature, and the illusions and myths brought by opium. The judges gave it high praise and unanimously chose to honor Chang with the Book of the Year award.

As for native-language literature, a total of seven recipients were selected for four awards, with the judges choosing from 77 submissions the winners of one Best Script and two each in the Best Taiwanese-Language Poetry, Best Hakka-Language Poetry, and Best Indigenous-Language Poetry awards.

The judges were impressed by the diversity in format, profound subject matter, strong structure, and qualitative excellence of this year's winners, which showcase the ongoing endurance and achievements of both established and rising Taiwanese writers. The only regret is that the number of submissions has remained flat; there is hope that more new faces will emerge in the future, as there is still much room for growth.

Each of these winners will receive a trophy and NT$100,000. Moreover, both Yu Yue-sheng and her sister Yu Yi-te (游以德) were in the running for the same award, with the latter having taken the Best Aboriginal Prose in Mandarin award last year.

The official awards ceremony will be held on Nov. 12 at the Taipei Marriott Hotel starting at 7pm. This year’s winning works will also be available in collected form as "Peak: Taiwan Literature Golden Award Winners 2019 (2019臺灣文學金典獎作品集)," due to be published in mid-November.