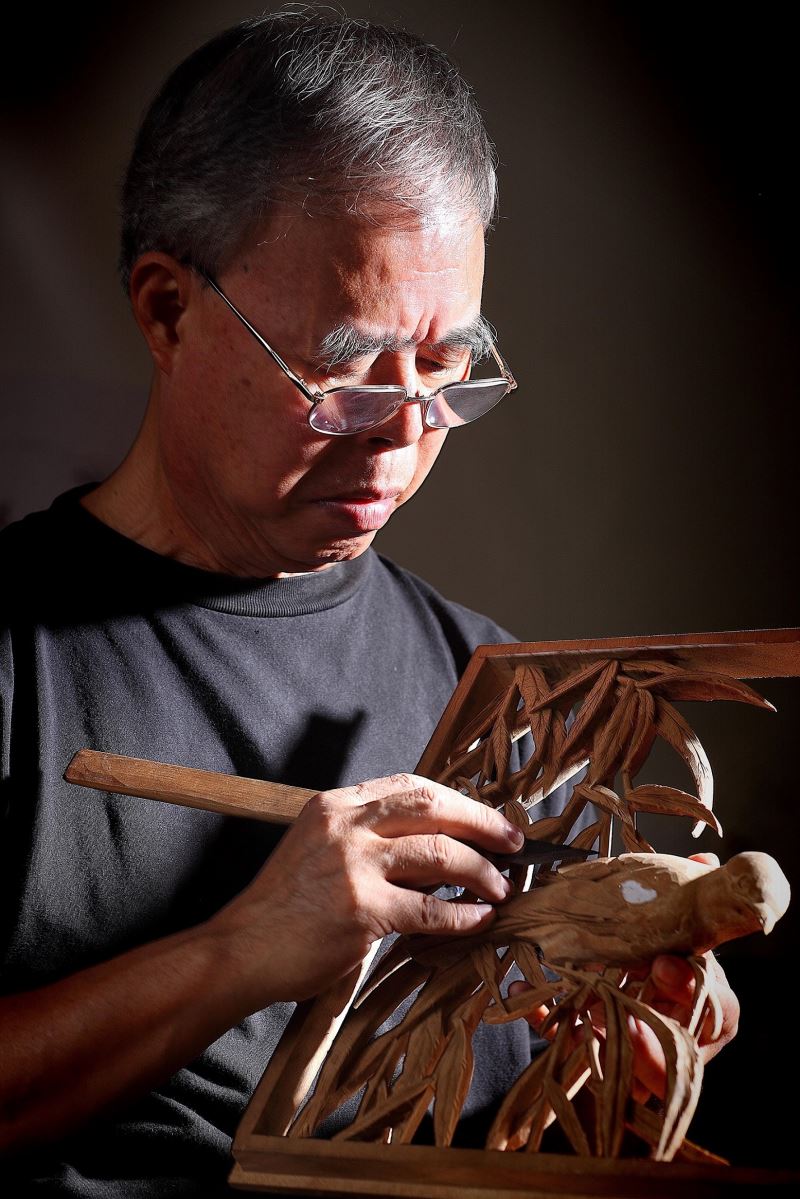 Organized by the National Taiwan Craft Research Development Institute (NTCRI), the 2019 National Taiwan Craft Achievement Award will be presented to master woodcarver Yeh Ching-yi (葉經義). Yeh was selected unanimously by the jury panel from a pool of 19 veteran artisans for the honor. Throughout his impressive career, Yeh has been an outstanding woodcrafts master, evidenced by his personality, attitude, exceptional skills, and his work in training apprentices to pass on his craft. Many of his masterpieces can be found in temples all across Taiwan.

Woodcarving artisan Yeh, who is known as "Master Ayi (阿義師)," was born in 1937 in Kaohsiung City. At the young age of fifteen, he became the apprentice of woodcarver Su Shui-chin (蘇水欽), who is from the Hui-an region of Fujian Province's Quanzhou City. The decorative art in Taiwan's temples can largely be categorized into two groups — Minnan (Fujian Province) and Cantonese (Guangdong Province), with the Minnan school further subdivided into Quanzhou and Zhangzhou styles.

Yeh's Buddhist statues, decorative carvings, temple screens, and nature-inspired designs are intricate and exquisite. In addition, his openwork wood-pillar sculptures and shrine ornamentations featuring flowers, birds, and flying dragons and phoenixes are multi-layered, delicate, and distinguished. His works showcase the Quanzhou style combined with his own unique flair, which he had developed through the years.

In his earlier years, he was focused on wooden temple carvings and decor and participated in many restoration projects on Taiwan's historical sites and buildings, including: The Temple of the Five Concubines (臺南五妃廟), Ruins of the Fengshan City (左營舊城), Fongshen Longshen Temple (鳳山龍山寺), The Lin Family Mansion and Garden (板橋林本源邸), and The Red House (臺北西門町紅樓戲院).

Yeh's craftsmanship can be seen all across Japan as well. He was asked to create the replicas of the king's throne, bed, and carriage seat for Shurijo Castle, a UNESCO World Heritage Site in Okinawa. His other works in Japan include: Myouanji (also known as Myoanji) Temple in Kanagawa Prefecture, Myohoji Temple in Hachioji City, Kogenji Temple in Nagano Prefecture, and No. 6 Anrakuji Temple on Shikoku Island. Due to his renowned craft skills, Taiwanese woodcarving has become ever more prestigious on the world stage.

The 82-year-old has created a variety of woodcraft arts, from traditional relief carvings to freestanding carvings, as well as traditional decorative carvings of statues, flowers, birds, and lions to more modern animal, plant, and landscape sculptures. Master Yeh's inspiration comes from his understanding of life and personal observations on nature, giving rise to a self-developed style and bountiful creative energy.

Yeh's focus on woodwork creations has won him numerous awards and acclaim. In 2014, he was recognized by the government as an important preserver of the art of ornamental wood carving. Minister of Culture Cheng Li-chiun will be in attendance to present the trophy and certification of achievement at the awards ceremony, which will be held at the NTCRI's Taipei Branch on Nov. 9.