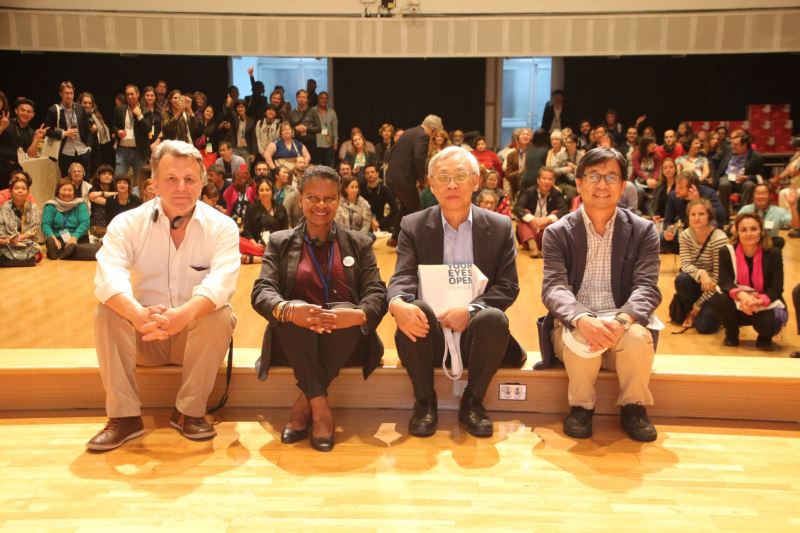 The International Federation for Human Rights (FIDH) held its 40th Congress in Taiwan from Oct. 21 through 25, with the closing ceremony held at the National Human Rights Museum on Oct. 24. People involved in human rights advocacy from around the world were present, with the museum having specially arranged a visit to the Jing-Mei White Terror Memorial Park and a speech at the ceremony by White Terror survivor Chen Chin-shen (陳欽生).

Chen Chun-hung (陳俊宏), director of the museum, noted that this was the first time FIDH had held its congress in Asia and said he was glad that they had chosen Taiwan for the event. He also thanked the Taiwan Association for Human Rights (台灣人權促進會) and FIDH for arranging for these global guardians of human rights to visit the White Terror memorial park that evening.

In its previous incarnation, the park was a place where political prisoners were detained, charged, tried, and executed. It is a symbol of the work done by several generations of political victims and social activists in driving Taiwan's transformation from authoritarianism to liberal democracy.

On May 24 this year, Taiwan became the first country in Asia to legalize same-sex marriage. The nation has also incorporated five core human rights treaties into domestic law. Over recent years, NHRM has employed a diverse range of methods to communicate and promote human rights concepts, and co-launched the Asia-Pacific branch of the Federation of International Human Rights Museums (FIHRM-AP) at the International Council of Museums (ICOM) conference in Kyoto this Sept. 3.

Director Chen appealed to all those who were present to pay attention to the human rights situation around the world and conflicts in the Asia-Pacific region in particular, while also inviting all FIDH congress participants and volunteers to take part in Taiwan's annual LGBT Pride Parade on Oct. 26.

Chen, a victim of the White Terror, talked about how the Ministry of Justice Investigation Bureau pinned him with unfounded charges and irreparably changed his life. A decade ago, he became a witness for the National Human Rights Museum, sharing his experiences of political oppression alongside other victims with visitors at the Jing-Mei White Terror Memorial Park to help change society.

Although he could never speak on behalf of all the victims, Chen said, he expressed his gratitude to all those in attendance for their efforts in fighting for human rights and helping more people understand and respect what those rights mean. He added that he shall continue along the same path of advocacy in hope of bringing forth a future free of all that seeks to wipe out our humanity.

With some hundred warriors for human rights present, the National Human Rights Museum again reiterated its collective aspirations for the voices of oppressed people around the world to be heard and for the universal values of human rights to take root and blossom in the hearts of each and every person.