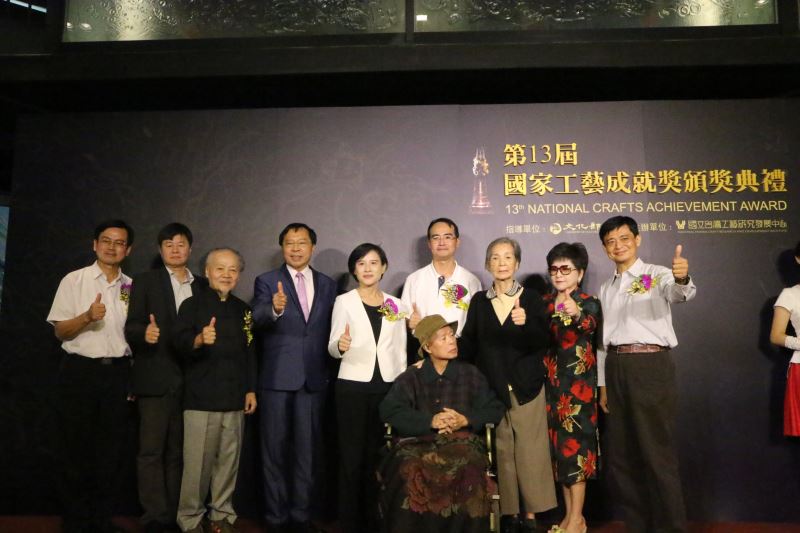 Yeh Ching-yi (葉經義), an 82-year-old woodcarving artisan from Kaohsiung, was honored with the country's top crafts prize — the National Craft Achievement Award — for his lifetime accomplishments on Nov. 9.

Speaking at the award ceremony, Minister of Culture Cheng Li-chiun said that such craftsmanship has served as one of the most important cultural carriers of human civilization, by not only bearing each generation's collective memories on life, aesthetics, and history, but also encapsulating the soul of a nation.

Born in 1937 in Kaohsiung City, Yeh is an outstanding woodcrafts master whose prolific creations can be found in temples all across Taiwan and abroad. This includes the replica of the king's throne inside Shuri Castle in Japan's Okinawa Prefecture, which was partially destroyed when a devastating fire ravaged the majestic building on Oct. 31 this year.

While constantly putting innovative ideas into his work, Yeh, who is affectionately known as "Master Ayi (阿義師)," has also been strongly committed to the restoration and preservation of heritage crafts nationwide and abroad, Minister Cheng said, adding that Yeh's pursuit of excellence has been exemplary in the development of Taiwanese craft culture.

According to Chiang Shao-yin (江韶瑩), representative of the jury panel, the woodcarving artisan was selected unanimously by the jury. The decision was made in the shortest period of time on record since the National Craft Achievement Award was introduced in 2007, Chiang added.

To continue to create an ideal environment for traditional craft masters, the Ministry of Culture has been advocating for increasing the annual budget of the National Taiwan Craft Research and Development Institute (NTCRI), Taiwan's premier institute for the promotion of crafts.

Yeh Kuang-chou (葉光洲), the artisan's son, accepted the award on behalf of his father, saying that the master woodcarver is delighted to receive this award.

My father has devoted his whole life to making crafts, so he has been recognized by many awards, Yeh said, but "in receiving this award, he [Yeh Ching-yi] no longer has any regrets in life."