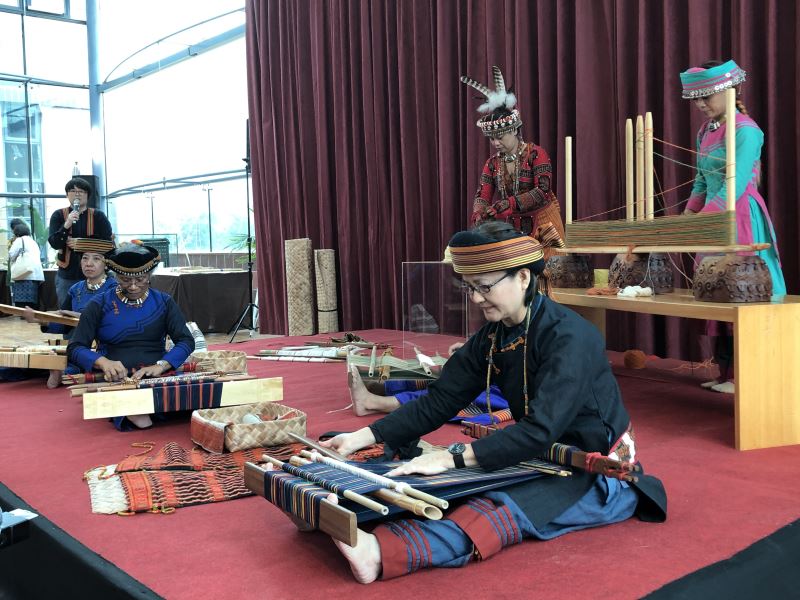 Following months of studying advanced Paiwan textile craftsmanship that was once considered a lost legacy, Ljumiyang (許春美), a master of Taiwan's indigenous weaving techniques, demonstrated how she upholds traditional weaving practices against the grinding wheels of time on Dec. 4 at the National Museum of Prehistory in Taitung.

In 2018, the National Museum of Prehistory (NMP) commissioned the Atabeads Culture Workshop (卡塔文化工作室), a Taitung-based cultural establishment, to conduct research on 40 pieces of Paiwan traditional woven works. By breaking down the weaving process step by step, Ljumiyang was able to confirm her knowledge of the traditional inlay weaving process, leading apprentice weavers to start from pinakatitan and then advancing to a more complicated form of kinaljagelesayan.

Led by Ljumiyang, the research project seeks to restore and maintain Paiwan cultural heritage. NMP, meanwhile, is exploring its potential role as a medium to facilitate cultural inheritance in addition to its major missions of collecting, researching, and presenting objects and materials of historical importance for the purpose of public education.

To preserve the cultural assets of indigenous peoples in Taiwan, NMP not only has conducted studies on their languages, but has also teamed up with aboriginal communities and craftspeople to analyze the museum's collections from indigenous perspectives, hoping to unveil the messages handed down from generation to generation and to retrieve the seemingly lost artistry stored only in the memory of tribal elders.

The detailed process of weaving the pinakatitan (plain) and kinaljagelesayan (twill) styles of the Paiwan people is now being presented at NMP's section for classic textile collections.