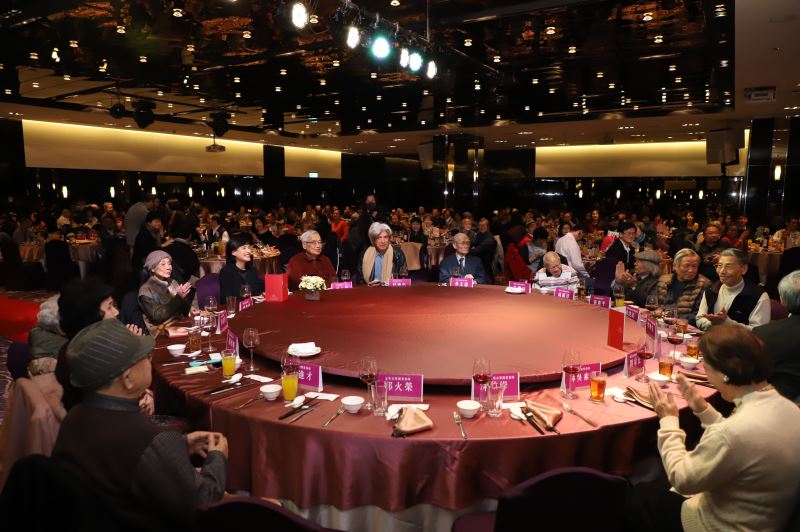 To acknowledge the long-term dedication of traditional theater professionals in preserving the continuity of the nation's intangible heritage and cultural assets, as well as their efforts to mentor a new generation to carry on their torch, the Ministry of Culture held a yearend gathering for over 300 folk artists at the Taipei International Convention Center on Dec. 8.

In her speech, Minister of Culture Cheng Li-chiun expressed her appreciation for the senior artists' endeavors in cultivating young talents and enriching Taiwan's cultural legacy. In a departure from past banquets, the 2019 event invited different generations of theater artists in the hope of deepening ties between mentors and their potential successors, the Minister pointed out.

To pass on the torch of traditional arts, the Minister said, the budget for intangible heritage preservation and inheritance has tripled from last year, and the funding doubled for the National Center for Traditional Arts (NCFTA) to run projects nurturing the "heirs" to traditional Taiwanese operas and craftsmanship. NCFTA's 2020 budget has also been set at N$1.2 billion, reflecting an increase of NT$400 million.

The Ministry will always be a fortress that secures the preservation of traditional arts, Cheng pledged, explaining that the government is planning to set up an interagency taskforce tentatively titled "Network for Intangible Heritage Revival (無形文化資產再生工作圈)."

Moreover, upon the 2022 opening of the NCFTA's Kaohsiung Park in the south, more regions across Taiwan will have its own heritage-focused venue, including Taipei's Taiwan Traditional Theatre Center in the north, Taichung's Cultural Heritage Park in central Taiwan, and the NCFTA’s Yilan Park on the northeastern coast.

Expounding upon on the significance of senior folk artists, NCFTA director Chen Chi-ming (陳濟民) said there is an expression in Taiwan that goes "one minute on stage takes ten years of hard work off stage," adding that all banquet guests have helped lay a solid foundation for the future development of traditional arts.