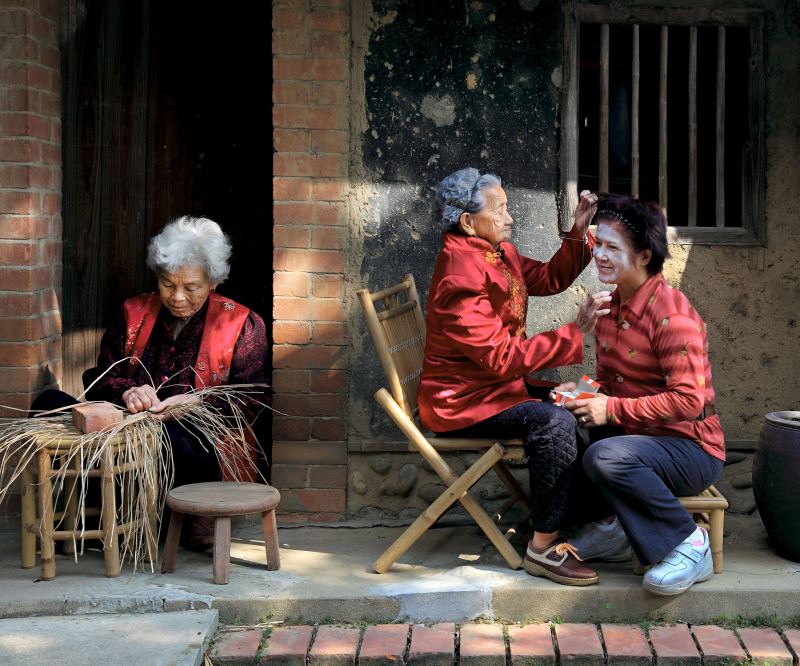 A photo of two female practitioners of facial threading and rush weaving taken outside a historical residence has placed first at a national photography competition themed "Collecting Memories." Organized by the Ministry of Culture's Taiwan Cultural Memory Bank project, the contest aspires to piece together and preserve the cultural landscapes and scenes of Taiwan.

In this year's contest, the panel selected three winning pieces and 47 outstanding works. The winning photo was taken in Yuanli, an urban township in Changhua County known as the home of rush weaving. It has been chosen for raising the profile of the traditional beauty treatment and the time-honored weaving skill — techniques that the younger generations are increasingly unfamiliar with, according to Li Yi-lan (李宜蘭), photographer of the captivating image.

"Collecting Memories" is part of efforts by the Ministry to preserve the integrity of Taiwan's past. Last September, the memory bank project teamed up with Wiki Loves Monuments to hold the "Loving Monuments" photography contest. A photo of the Hilltop Garden Watercourse Museum (臺南山上花園水道博物館), a heritage site in southern Taiwan, was awarded top place for capturing the watercourse's spectacular aesthetics.

The Taiwan Cultural Memory Bank, a project that the Ministry launched in 2019 to reconstruct the history of Taiwan throughout different eras, hopes to become a carrier of memories and emotional attachment that the people in Taiwan have for this land, Lee explained.

While the "Collecting Memories" photography contest featured photos of traditions such as facial threading, rush weaving, and drying persimmons under the sun, breathtaking monuments nationwide were unfolded through the "Loving Monuments" photography competition, Lee said, adding that the two events unwrapped Taiwan's local sights and shared recollections of different eras.

Rich in subjects and cultural diversity, a total of 100 selected pieces will be preserved by the Taiwan Cultural Memory Bank under the "Creative Commons" license. As such, the images will be registered as cultural assets that can be used in the public domain.

In addition, the top ten photos from the "Loving Monuments" photography contest are now representing Taiwan to participate in the Wiki Loves Monuments global contest, the world's largest snapshot contest for historical sites.

Equally remarkable is an interlude to the "Collecting Memories" competition when an individual recognized her grandmother from a photo selected by the contest, providing the crowning touch to the event. The photo was taken in 1986 in Hsinchu County's Jianshih Township, featuring a 99-year-old Atayal woman with the tribe's distinctive facial tattoos.

The image went viral shortly after it was published on the competition's Facebook page, with tributes to the beloved granny pouring in at the comment section of the photo by people once under her care. The unexpected episode also raised public awareness on the preservation of Atayal facial tattooing traditions.