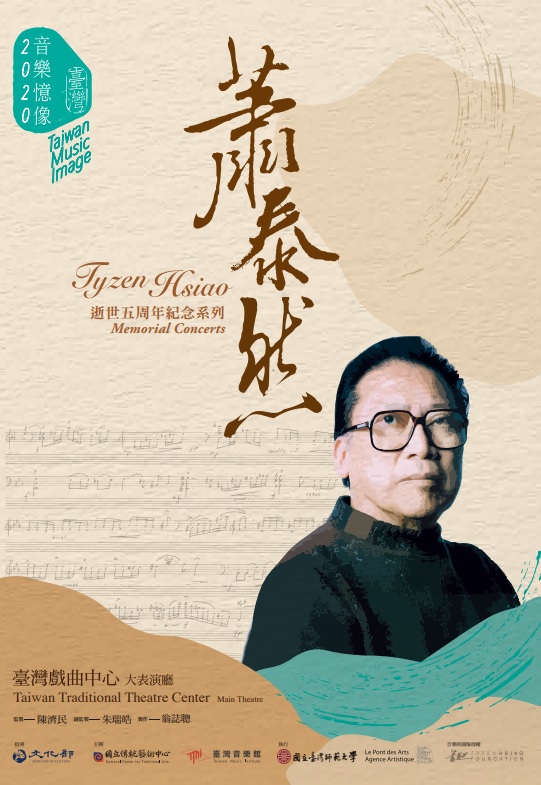 In memory of late Taiwanese composer Tyzen Hsiao (蕭泰然), the Taiwan Music Institute will be organizing two concerts at the Taiwan Traditional Theatre Center in Taipei on March 7 and 8 to commemorate maestro Hsiao's legacy and the fifth year of his passing.

The first concert on March 7 is called "The Angel from Formosa" and will feature large-scale compilations of Hsiao's masterpieces from various music genres.

The concert repertoire will feature classic Hsiao works including his "SoLi for Percussion," "How Lovely is your Dwelling Place (祢居住的所在)," "Lift Thine Eyes (我欲舉目向山)," "The Sojourner (出外人)," and "Cello Concerto in C minor Op.52 (C調大提琴協奏曲)."

In addition, the lovely orchestral set "The Angel from Formosa (來自福爾摩沙的天使)" and the orchestral and choir composition piece "Ilha Formosa: Requiem for Formosa's Martyrs (啊！福爾摩沙–為殉難者的鎮魂曲)" will also be performed.

On March 8, the second concert titled "Nostalgic Thoughts from Home (來自故鄉的思念)" will revisit Hsiao's piano and chamber music pieces. Pianist Lina Yeh (葉綠娜), a long-time collaborator and friend of Hsiao, was invited to curate and perform in this event.

In addition to performing Hsiao's compositions, there will also be the premiere of "Flying (飛翔)" by Hsiao's close friend, acclaimed composer Ken Chuang (莊傳賢). "Flying" will be combined with a multimedia presentation that was created through post-production technology to demonstrate Hsiao's love for the land and people of Taiwan.

The Taiwan Music Institute will also hold a series of talks to accompany its upcoming exhibition — "Vagabond Homecoming: A Memorial Exhibition of Taiwanese Composer Tyzen Hsiao" — to commend his lifelong contributions to Taiwanese music and offer new perspectives on his works and life.