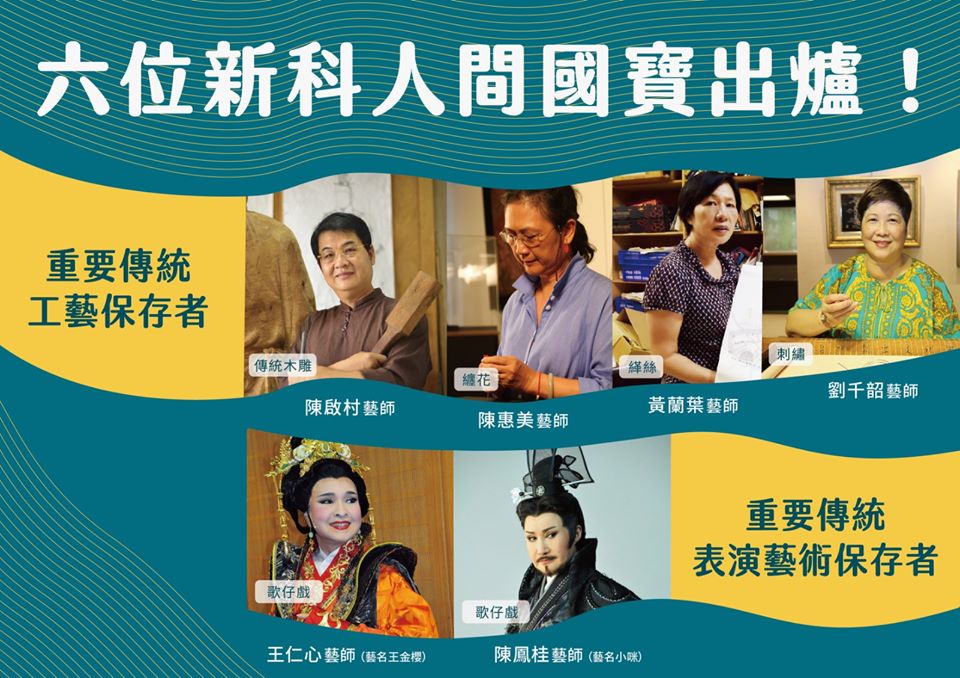 The Ministry of Culture recently announced that traditional embroidery, kesi silk tapestry, and silk-wrapped flowers have passed reviewed by the 2019 Traditional Craft Review Committee for registration as national-level "Important Traditional Crafts," with practitioners Liu Chien-shao, Huang Lan-ye, and Chen Hui-mei recognized as respective preservers thereof. The announcement also included the addition of Chen Chi-tsun as a preserver of traditional wood carving and of Wang Ren-hsin and Chen Feng-kuei as preservers of koa-á-hì, or Taiwanese opera.

The Ministry thanked the veteran artisans for their long-time participation in the Bureau of Cultural Heritage's efforts to reinvigorate traditional arts, with their taking on of apprentices helping keep these crafts alive, introduce them to wider audiences, and encourage more people to treasure these bespoke aspects of Taiwanese culture.

Between 2016 and 2019, there has been a total of 19 cultural practices registered as national-level intangible heritage, including four traditional performing arts, 10 traditional crafts, one oral tradition, and four important folk arts. At present, 64 such practices have been registered, up by 42% since 2016.

Embroidery is iconic among Taiwan's traditionally women-only arts that are widely employed in both fashion and daily life. Through thread, patterns, and needlework, it creates a distinctive aesthetic that reflects the creative and design capabilities of its artist. Liu Chien-shao has been a practitioner of this art for over 40 years, developing a deep familiarity with and ability to reflect the culture, skills, and knowledge inherent to the field. She is well-versed in the various stitching methods involved, creating works of stylistic refinement and elegance that embody the aesthetic and artistic values of the craft. The works of Liu are stellar representatives of Taiwan's adaptation of Japanese-style embroidery and how it is being kept alive by Taiwanese practitioners.

As wages rose in Japan in the 1970s, businesses seeking lower costs to help meet market demands turned to Taiwanese workers. It was this development that saw Nishijin-ori, a Japanese textile with a tradition stretching back centuries, begin to be produced in Taiwan, which had the additional effect of revitalizing the ancient craft of kesi, or silk tapestry, here. Over her career of 40-plus years, Huang Lan-ye has developed a deep familiarity with the techniques of Nishijin-ori weaving and kesi tapestry. Through the collection of supplies for dyeing, weaving, and embroidering, Huang has also pioneered the use of previously unused materials like willow, sappanwood, areca shoots, and coffee beans. She has thus opened up new horizons for this art form, becoming an icon for how the art has developed with local flair in Taiwan.

Chen Hui-mei learned the Hokkien art of making silk-wrapped flowers from elder Chen Ai-yu (陳愛玉), initially making her floral creations in the northern Taiwanese style before incorporating aspects of the Hakka and Kinmen forms to create a style uniquely her own. With her familiarity with the eight types of silk-wrapped flower styles from northern Taiwan and the four from Lukang, she is able to guide her students through a total of 12 styles. She has also been invaluable in systematizing the production of the craft in terms of materials, tools, methods, and processes, naming the various techniques and components to create a graded educational system for the art.

Traditional wood carving was registered as an important traditional craft in 2011, with a new preserver thereof recognized in this latest round of reviews — Chen Chi-tsun. Chen is thoroughly familiar with the knowledge and skills underpinning the craft, having learned his trade under Lin Yi-shui (林依水) of the Fuzhou School and worked at renowned Buddhist craft store Ren Le Hsuan (人樂軒). Through experience, he developed a mastery of the carving of Buddhist statuary, as well as its lacquering and ornamentation, accurately recreating the hallmarks of the Fuzhou School and staying true to its rich ethos. Building on this traditional foundation, Chen has also taken on modern elements, including sketching, sculpturing, and art theories, further refining his depictions of human emotions, postures, and the fall of fabrics in an extension of tradition that takes lessons from the East and West alike.

Koa-á-hì, or Taiwanese opera, was registered as an important traditional performing art in 2009, with two new preservers thereof recognized in 2019 —Wang Ren-hsin and Chen Feng-guei. Wang, who goes by the stage name Wang Jin-ying, is a veteran performer of dan (female) roles, having performed in indoor, outdoor, radio, television, and theatrical performances throughout the industry's contemporary development with her highly recognized sweet, smooth vocals. Her personal collection of sì-kù-liân (四句聯, four-line rhymes) songbooks, which preserve a number of operas and vivid characters, has also been of great value to the preservation of the sì-kù-liân style.

Chen Feng-kuei, who is better known by her stage name Hsiao-mi (小咪), has performed in a wide array of koa-á-hì operas in sheng (male), dan (female), and chou (comic) roles, bringing all to life skillfully and naturally. She has earned a reputation as an "actor of a thousand faces" for her ability to take on such a diversity of characters to such a high standard. In the course of her career as a performer, she has worked with a variety of respected troupes on television and in modern theaters, and in recent years she has turned her attention to cultivating the next generation of koa-á-hì talents.

The Ministry of Culture will continue to develop plans for the preservation and conservation of important artistic and craft skills per Article 92 of the Cultural Heritage Preservation Act (文化資產保存法).

Such efforts will include the establishment of archives, the production of surveys and records, mentorship programs and workshops, educational activities, preservation and reinvigoration projects, and systematic updates of the above measures.

The Ministry aims to not only preserve the aesthetic values and practical functions of these traditional arts, but also protect and record the details of folk artists, their works, and the systems of knowledge and creative beliefs that underlie their crafts.