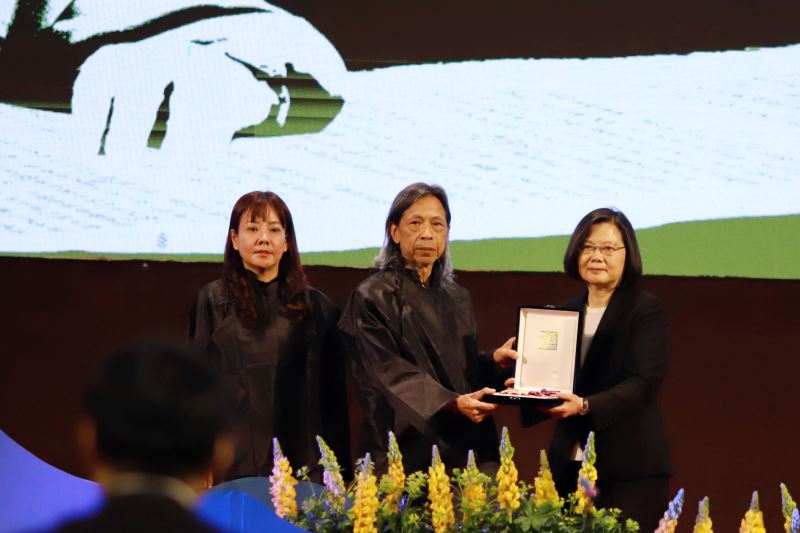 To mark the late Hakka writer-mentor Chung Chao-cheng's (鍾肇政) tremendous contributions to Taiwan literature and Hakka culture, a memorial concert was held in Taoyuan, the maestro's hometown, on June 14. At the solemn memorial, President Tsai Ing-wen conferred a posthumous presidential citation and the Order of Brilliant Star with Special Grand Cordon, making Chung the first non-civil servant to receive medals from three presidents.

Lauding the late writer's lifelong dedication to perpetuating and promoting Taiwanese literature, Minister of Culture Lee Yung-te said at the event that Chung, who passed away on May 16, is Taiwan's first-ever writer to pen roman-fleuves of the likes of the "Muddy Water Trilogy (濁流三部曲)" and "Taiwanese Trilogy (台灣人三部曲)."

Apart from cultivating upcoming writers and carving out room for them, the "Mother of Taiwan Literature (台灣文學之母)" spared no effort in restoring Hakka culture to its former glory and revitalizing the Hakka language, Lee said, adding that Chung was also the driving force behind the establishment of the Formosa Hakka Radio Station (寶島客家電台), the Taiwan Hakka Association for Public Affairs (台灣客家公共事務協會), and the Taiwanese Hakka Association of The World (全球客家聯合會).

From time to time, the Minister noted, the legendary novelist incorporated Hakka terms in his works, making the language and culture of the Hakkas more widely known among members of the Taiwanese public through the medium of literature.

To commemorate the literary maestro's efforts in enriching Taiwan's writing scene and advancing the rights and interests of the Hakka community, the Ministry of Culture and the Hakka Affairs Council jointly applied for a posthumous presidential citation after the passing of Chung.

A six-minute clip — featuring Minster Lee, writer-scholar Chen Fang-ming (陳芳明), and Hakka writer Li Qiao (李喬, also credited as "Lee Chiao"), among others — was produced in recognition of the inspiring writer's personal character, humanistic dedication to Taiwan literature, and all the good times that they've spent together.