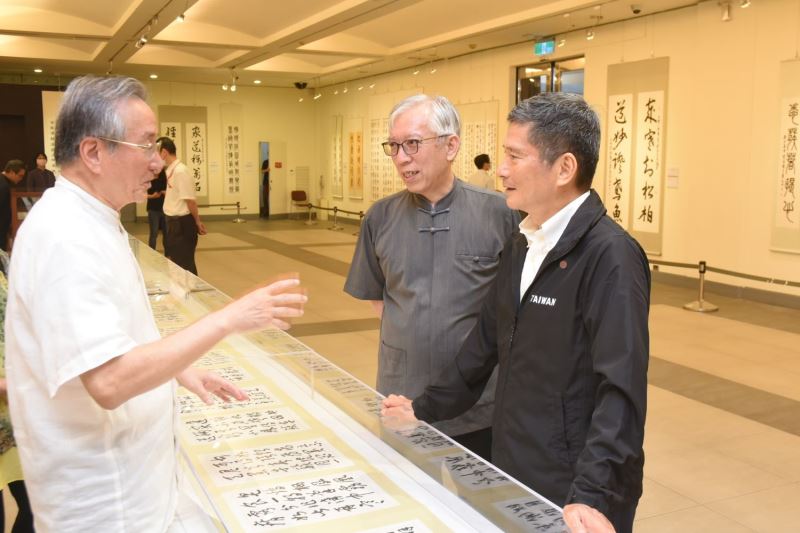 Lee was born Lee Yun-tai (李雲台) in Anhui in 1925. He came to Taiwan in 1949 and graduated with a degree in art from the School for Political Warfare Officers (now Fu Hsing Kang College, National Defense University). As a child, Lee accompanied his grandfather in domesticating animals, and the horses and cows on the farm would go on to be common subjects of his paintings.

The composition and approach of his pieces were unlike traditional ink-wash, and their unusually real-world, down-home subjects were distinctively Lee's personal style. As an educator, he also spared no effort in raising countless students and passing on his skills and art knowledge to new generations. His tireless spirit was invaluable in laying the groundwork for future Taiwanese ink-wash artists.

Calligrapher and seal artist Hsueh graduated from Taipei Teachers College and National Taiwan Academy of Arts and excels at all five calligraphy scripts. His works have the power of the Bei (stone tablet, 碑) school and the grace of the Tie (calligraphy book, 帖) school, with special emphasis on Han-era seals and those of other ancient dynasties.

By applying calligraphy to the art of seal-carving, the former athlete's aesthetics are a combination of both Bei and Tie schools, creating works where grace can be found in strength. He is also a gourmet aficionado with a penchant for red wine. His good friend, Academician Tseng Yong-yih (曾永義), summarized Hsueh's life as "good books, good seals, good tea, good wine, good sights and scenes, good friends, good family."

"There is a Time ― Memorial Exhibition of Lee Chi-mao's Ink Figure Paintings" runs from May 21 through June 17.

"Flourishing in the Afterglow ― Exhibition of Calligraphy and Seal Engravings by Hsueh Ping-nan" runs from May 9 through June 16.