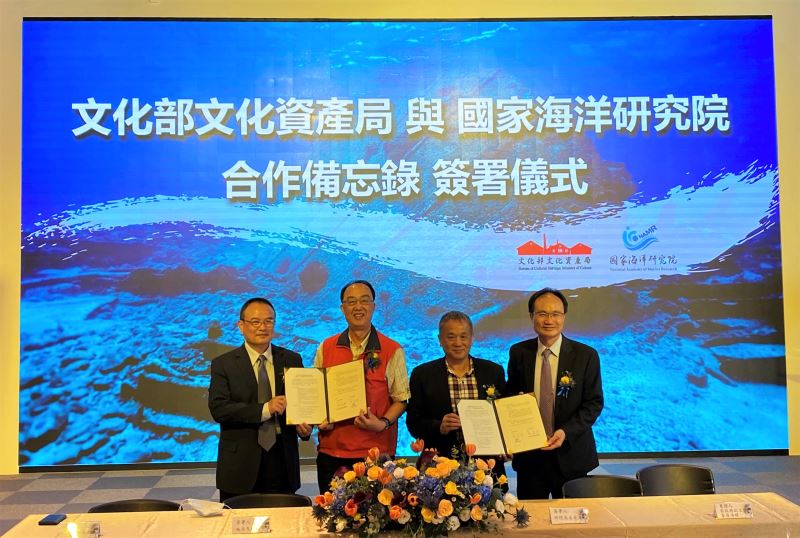 The Bureau of Cultural Heritage (BOCH) signed a memorandum of understanding with the National Academy of Marine Research (NAMR), a Kaohsiung-based think tank responsible for the formulation of maritime policies, to facilitate underwater archaeological research and cultural heritage management on June 17. The newly established partnership will also see two sides share knowledge, talent, and operational capacity and undertake marine research, monitoring, and exploration.

This MOU aims to forge long-term cooperation between the bureau and the think tank on numerous projects, including researching and documenting the history of underwater cultural assets, advancing maritime detection technology, and carrying out studies on sites where sunken shipwrecks have been discovered.

Deputy Minister of Culture Hsiao Tsung-huang (蕭宗煌) said it is an honor to witness the signing of an MOU that will foster a national team dedicated to the preservation of underwater cultural assets. Through cooperative projects and expertise sharing, a better preservation of underwater cultural heritage and more comprehensive joint research programs can be expected, Hsiao noted.

After Taiwan designated June 8, which is World Oceans Day, as National Oceans Day this year, it is hoped that Taiwan's marine preservation and research will be in line with existing international practices on such topics, Hsiao said.

Apart from promoting the preservation of underwater cultural assets as outlined by the National Ocean Policy White Paper (國家海洋政策白皮書), Taiwan's first-ever set of maritime guidelines, the Ministry is following the Executive Yuan's "Salute to the Seas (向海致敬)" policy to conduct research on marine ecology and promote ocean-themed art, music, and audiovisual works, the Deputy Minister said.

In the hope of further enriching Taiwan's marine culture, the Ministry has been researching and raising the visibility of Austronesian cultures and the history of Taiwan during the Age of Exploration, which is also known as the Age of Discovery, Hsiao added.

BOCH Director-general Shy Gwo-long (施國隆) said the bureau has staged surveys of underwater cultural assets in the waters adjacent to Taiwan proper over the past 14 years. A total of 90 objects were discovered, of which 20 were identified as shipwrecks, including six Chinese ships from the Qing Dynasty, four British ships from the 19th century, three Western-style sailing ships, one American ship, and six Japanese ships. Animal fossils from the late Pleistocene era were also identified.

With the unique geographical location and historical complexities of Taiwan, there are ancient shipwrecks from numerous countries and relics from different ethnic communities in Taiwan's surrounding waters.

However, due to operational obstacles caused by water pressure and the nation's distinct maritime environment, underwater archaeological works are racing against time. It is thus essential for Taiwan to formulate a tailored code of practice that suits the nation's surrounding waters while guiding related organizations to conduct underwater investigation and monitoring.

Established in April 2019, NAMR is an institution that plays a key role in outlining Taiwan's marine policies and conducting research on oceanic cultures, resources, science, ecology, and conservation. Apart from having rich experience in integrating its marine biology research findings with long-term underwater environmental-monitoring results, the academy also cultivates talents in related areas.

BOCH has seen progress in researching and preserving marine cultural assets over the years. However, it was challenging for the Taichung-based bureau to develop solid research capacity for marine exploration and investigation and to train professionals in related fields as the bureau usually sought assistance from external institutions to meet the ocean-related goals outlined in its annual plan.

The bureau's underwater monitoring work and marine ecology-related research on six registered shipwreck locations have just started. With the help of NAMR's professional team, the establishment of a permanent marine monitoring-and-preservation system will surely fall into place.