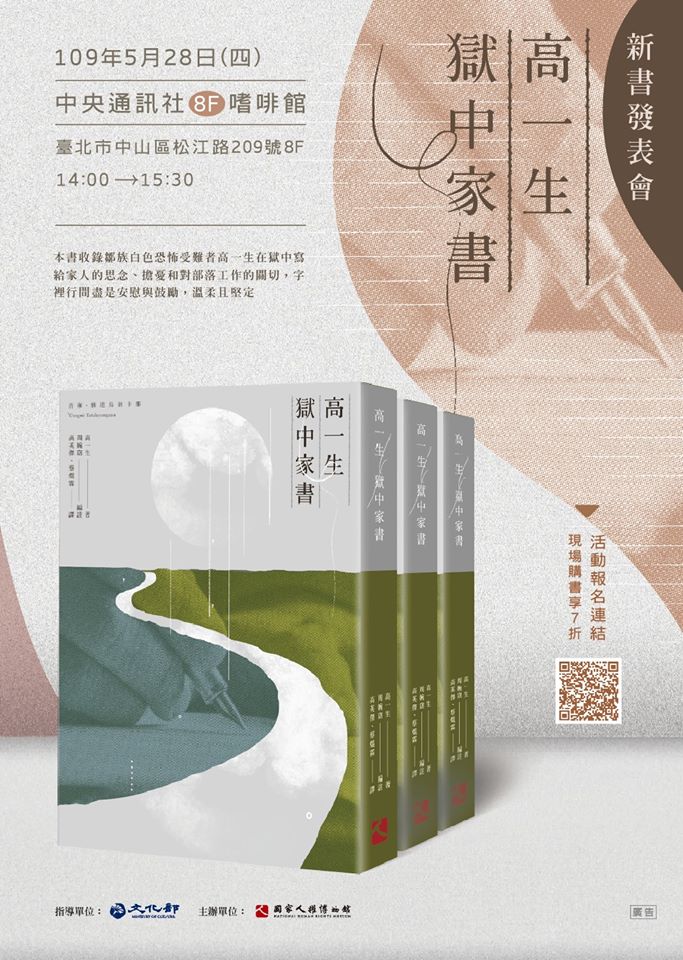 A newly published book of letters written by ’Uongʉ Yata’uyungana (高一生), a late prisoner of Taiwan's political repression known as the White Terror, was officially released on May 28. Titled "Sent From Prison — Family Letters by ’Uongʉ Yata’uyungana (高一生獄中家書)," the book carries the most heartfelt words from the indigenous pioneer to his loved ones and his people from the Alishan-based Tsou tribe.

Confined in a prison on Taipei's Qingdao E. Road, ’Uongʉ Yata’uyungana sent his first family letter on Sept. 14, 1952. Before being executed on April 17, 1954, the Tsou gentleman wrote a fair amount of letters in both Mandarin and Japanese to his wife and children, of which 56 have survived till today.

Written in prison cell three, the private correspondence is historically valuable as most letters from ’Uongʉ Yata’uyungana's fellow inmates are no longer available. In addition, the publication of these significant historical documents provides readers with a seldom-seen vantage of Taiwan's human rights situation during that particular period, representing a milestone in the current development of indigenous transitional justice.

Translated into Mandarin by Avai Yata’uyungana, the book is a collaboration between Tsai, Chou, and Isoko Tsuda, a professor with New Taipei's Chihlee University of Technology. Like ’Uongʉ Yata’uyungana, Tsai lived through Japanese and Nationalist rule, making him better equipped to understand the context of the late activist's writings. Chou and Tsuda, on the other hand, strove to ensure the translations remain faithful to the original Japanese and Mandarin text.

Avai Yata’uyungana, who is now a retired elementary school teacher, said it is an emotional realization to see his father's letters collected and published as the private correspondence had been the only source of comfort and support for his family. "In a hometown without you, spring fades," Avai Yata’uyungana sang in Japanese to pay tribute his father, who once wrote to his family requesting for his letters to be preserved. "Read them when you feel alone," the words say.

"We made it," the 80-year-old stated simply, 68 years after his father was arrested and transported for detainment and eventual execution at a military judicial compound in Taipei.

Tsai recounted that both of them went through an era of dramatic change and upheaval. ’Uongʉ Yata’uyungana's love for his family, the Tsou, and Taiwanese society, as embodied in the letters, was deemed sin in the eyes of the ruling government, Tsai said, while expressing hopes that during the time that transitional justice is addressed, more people will know about the past pain and sufferings.

Overwhelmed by a myriad of emotions, Chou, who annotated the book, pointed out that many people who have contributed to this land are no longer remembered by Taiwanese society. Through these letters, the scholar said, readers will not only be transported to an obscured period of history, but also get to know ’Uongʉ Yata’uyungana and numerous White Terror victims. Calling for a thorough look at that dark period, Chou said she hopes these letters will be included in textbooks and hence be known to more students.

Among the contributors to the book was Tsukamoto Zenya (塚本善也), a Chinese Culture University professor who has long been devoted to researching historic indigenous elites and thus laid a solid academic foundation for studying the pioneer of indigenous identity and rights. Zenya founded a research society with sole focus on ’Uongʉ Yata’uyungana in 2005 and organized an international seminar in Japan to mark the Alishan-born advocate's centennial birthday in 2008.

Chen, who accompanied Avai Yata’uyungana to his father's tomb on April 17, the 66th anniversary of his execution, to pay tribute to ’Uongʉ Yata’uyungana with the book, said he wishes the publication will achieve two ends. First, he said, the public will have a better idea of how indigenous communities suffered from the repression meted out by that authoritarian regime.

Secondly, as the gravity of systemic violence that inflicted pain on the indigenous individuals and communities is far beyond society's understanding, NHRM has begun to address transitional justice together with literature and the history of indigenous communities since 2019, Chen said.

Approaches to transitional justice should take into consideration civil and political rights, issues arising from the social and cultural expectations of that era, and indigenous land claims, the NHRM director added.

To mark the momentous event, Ilid Kaolo, a singer-songwriter of Amis descent, performed two songs written and composed by ’Uongʉ Yata’uyungana — "The Spring Goddess" and "Songs of Immigration (I)." Created in 1952 when Yata'uyungana was imprisoned, "The Spring Goddess" was a song dedicated to his wife Haruko Yukawa (1913-1999). "Songs of Immigration (I)," meanwhile, is a 1950 work encouraging members of the Tsou tribe to migrate to a new territory.

The book is available from here and here.