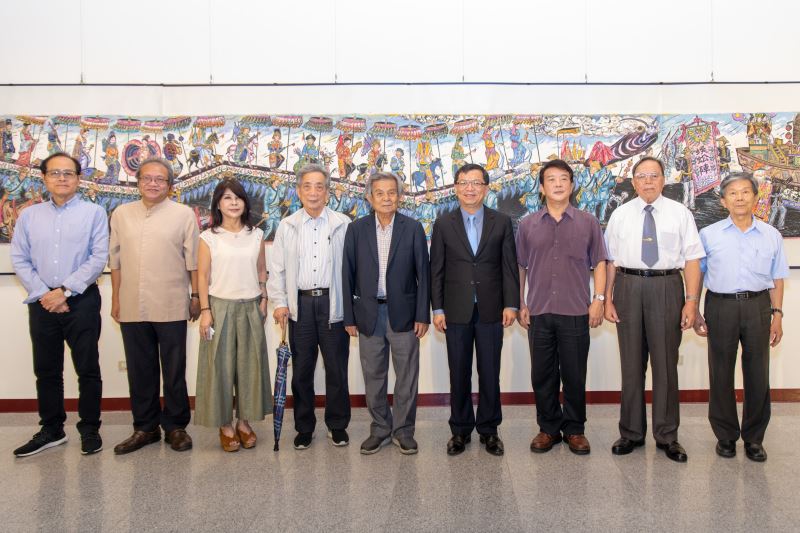 A 124-meter-long woodcut print featuring processional art troupes performing in celebration of the birthday of the sea goddess Matsu is on display at the First Exhibition Hall of the Chiang Kai-shek Memorial Hall in Taipei from Sept. 4 to Nov. 29. The "Matsu Folk Art Troupes, Earth Sigils" exhibition shows this masterpiece which took Lin Chih-hsin (林智信) 20 years to accomplish.

Titled "Celebrating Matsu," the woodcut print scroll captures 1,066 distinct characters that are participants in Matsu procession, including members of folk dance troupes, martial-arts troupes, and drum teams, celestial generals, Nanguan and Beiguan musicians, and musicians and performers on parade floats (藝閣), which can only be seen in southern Taiwan.

Through the artistic form, Lin has preserved the fading folk culture, which demonstrates the vitality of the people of Taiwan, according to an introduction by the exhibition hall.

Shedding light on his artistic journey, Lin said at the opening of the exhibition that when he was young, he suffered from asthma and was at one point on the brink of death, which prompted him to devote his life to arts when he managed to survive his illness.

The 84-year-old artist said, by the time he turned 40, he was determined to create a large woodcut print dedicated to the most worshipped folk deity Matsu. It took him 20 years to accomplish, as the print required time-consuming efforts in researching, sketching out the composition, and coloring.

In addition to this representative piece, some of Lin's woodcut prints and paintings of rural landscape and country life are also on display. The exhibition branches out into three major areas, with one showcasing the Matsu-themed artwork, one exhibiting Lin's prints on Taiwan's rural landscape from early days. The third area, meanwhile, displays oil paintings that encapsulate the authenticity and simplicity of farm life in Taiwan.

Praising Lin as an artist who presents Taiwan's tremendous vitality through various artistic expressions, Vice Minister of Culture Lee Lien-chuan (李連權) said at the opening of the exhibition that the history of Lin's art pursuit reflects the Tainan-born artist’s life story, and, it also reflects the history of Taiwan's development in transition.

The performance of folk art troupes depicted in "Celebrating Matsu" is Taiwan's important cultural asset. It is hoped that the folk heritage will be preserved and passed on to future generations through Lin’s achievement in arts, Lee concluded.

In line with the exhibition, there will be two talks on Lin's creations at the memorial hall by the artist himself and professor Hsiao Chong-ray (蕭瓊瑞) from the National Taiwan Cheng Kung University on Sept. 13 and Oct. 11, respectively.